This is the World Famous TelemarkTalk / TelemarkTips Forum, by far the most dynamic telemark and backcountry skiing discussion board on the world wide web. We have fun here, come on in and be a part of it.
Post Reply
56 posts

well, that was a short season

it's raining, and our glorious snow is quickly slumping. hope it all doesn't disappear as i have been planning a trip over break with my girl. i guess we could always hike, but that totally sucks.

here's to hoping you all are seeing better skiing weather. get out while you can!!!
Top

I know it sounds kinda counter intuitive....but....On one mountain range there was no base....On another there is about 2 and a half inches of crusty ice....On top up in the Highlands the total is @ 14-18 inches of sweet ride the bottoms flat powder....Don't hit much up there but the former is all rock...limb....everything smacks you in 10 inches of powder....This is going to solidify the base and from this consolidation everything will get better so....Here is to hoping...gtt
Top

It looks like you'll be getting a pretty good dump late this week. There's a storm that is going to most-likely go south of us, putting you guys in the crosshairs. Then, very cold air behind it should set you up for good lake effect.

The rain and warm's not so bad. We need some base to set up. Right now for us, it's a very thin base with super fluffy lake effect on top. You basically sink to the rocks and twigs. With the rain, the base will be in good shape for hopefully the rest of the season.

Several years ago, when we had the record cold winter (2012?), we NEVER got any base snow setup but we did get tons of super light powder lake effect (armpit deep: several feet). It was actually a pretty terrible ski year due to VERy cold snow (slow) and almost bottomless lake effect powder (virtually NO system snow) which caused skiers to sink to the grass and rocks below. The only turning technique that worked in those conditions was to basically ride the rear ski hard and stick the lead ski up and out in front of you like a weirdly angled pontoon or something. It was ridiculous.
Top

Ha. I remember that winter. I camped in the porkies one weekend and had to keep the stove just cranking.

This resulted in it melting itself straight toward the ground as fast as it could. This was when I set it up. It dug itself down at least another foot over the course of a couple nights. I was reaching down into the hole at night to keep it fed.

Here's hoping for a good solid base this year!
Top

Wow, nice stove setup! How did you manage the stovepipe when your stove was sinking? Also, that hopslam most-likely kept you warm! I wish the Porkies were closer to me because I'd be there every weekend if that was the case. I've rented a cabin (want to rent a yurt) and spent some time there on occasion but not nearly enough for how good the snow and terrain is there. I haven't skied the ski hill in recent years: ever since GCC took it over. Looks like you'll get quite a bit of LES in the next 10 days or so...where I'm at, we need NNW, N, NE winds which usually occur a little later in the season.
Top

The stove pipe sticks out of the side close to vertical, so you get a lot of float as things move around. 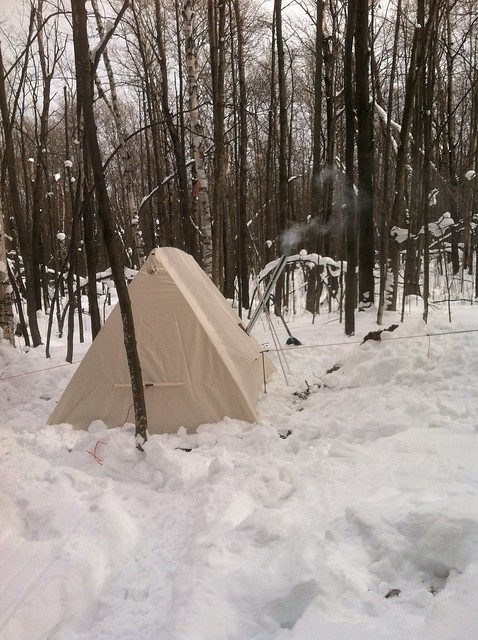 How to know if you spend too much time at the porkies: When the former manager of the porkies takes a job at your local nordic trails and stops grooming to ask "Hey, do you ski at the porkies a lot?"

Me: "Uhhhhhh" (Frantically thinking of all the things I could have done that might have pissed somebody off.)

I guess I'm "that guy". Although I'm sure there are several of us that qualify.

ObThreadTopic: Done raining and freezing up quite nice!
Top

yeah, that is a great hot-tent! i've really been wanting one, but you know, i keep spending money on skis. maybe one of these days....

i remember that winter, not because i was here in the mitten, but because that was the first winter i was in alaska and my folks were getting nearly the same temps as me at times! it was pretty bizarre, even from that far away. that was 2013-14 pretty sure.

the warmer temps may be good for the base, but around here i just worry about it taking all the snow from last week and then have to start over again. thankfully it is spose to get cold again tonight and stop all this melting, and yeah they are calling for more snow again tomorrow and the next day, so disaster avoided so far!as long as there is snow for the couple days after christmas i don't care

are you using the treated fabric or straight canvas? that looks like the newer stuff, yeah? pretty sweet...
Top

It's treated canvas, although very breathable. I've had the opportunity to stay in hot tents from a couple of different sources- this one beats them all for lightweight backcountry travel.

Several friends have tried cheaper approaches, but ultimately settle on a snow trekker. It is the single most expensive piece of gear I have ever purchased. I don't regret it for even a second. Neither has anybody else I know that has purchased one. It's a well though out, well made product.

(If you make it to midwest telefest, stop by for a beer!)
Top

the title says it all. second thaw of the season and this time heavy rain. forecast is calling for a rapid cooling, so severe ice is predicted across the region for tonight and tomorrow with high winds and blowing snow from the north.

this one might be a doozy. and pretty much all the good snow has been rained away. the warming over the last two days made the skiing kinda tough, and some red mostly got me through. thankfully no klister yet! the base is still in the woods, and my track is somewhat intact (i hope it can make it through tonight!). but the first dh has become a rivulet and i won't be able to ski it until we get a decent snow again.

have fun out there tho!!!