This is the place to debate politics, global warming, and yes, even the origin of man, whatever. Simply put, if you want to argue about off topic stuff, you've found the right board. Have fun!
Post Reply
41 posts

I ride a Specialized FSR w/ 5 in travel front and rear, adjustable, usually set soft as I have a carbon fiber cage insert with 6 titanium deck screws wrapped around a short section of my lower spine, and I kinda like the cush of a soft shock and a BIGASSED size soft seat for the first 1/2 inch of squish. Falling off at every spped is usually to be expected, if its not too hot, I wear armor. Fucking rocks are sharp and HURT, its not soft like ice and slush. ((Y'all ever hear of cactus? I HATE CACTUS.))

I also like to go too fast. Always too fast. Thats about 5 miles an hour someplaces, 40 others but I discovered the biggest improvement in a bike for the buck is replace the handlebar riser with the tallest you can get, just a very fewer inches change from the (somehow) stock and classic stem will make HUGE changes in your stability, lung capacity and keep you from flying over the handlebars during long descents. I went from doing flips once every other trip to almost never and every one of the guys who have changed love it, It helps clear your gut if you're an older guy... you breathe better, your weight is kept further back (and that's BIG for fat guys...) The bike shops don't seem to know these things, I been amazed how bad some advice can be from a salesman... throw the damn seat away of anything you buy, its gonna be hard crap. Your seat is your primary interface, you ain't no racer no more, you are going to be sitting down a lot more. Clips are mandatory but a half clip/flat pedal variety exists, they are cool if you ride your trailbike around town.

I see occasional hardtails and rigid bikes occasionally on trails, but rare. Most 29's are hardtails, they are the exception, highly regarded... I never roaded one. Standard FS is 4 inch, good for all mountain and most descents if you hang on, usually light enough to pedal uphill. the Single w/ a big cassette is used some, and the standart seems to be moving towards a twox10.

LOTS of grey hair on bikes now. Its the Scene for Geezers if you are a musclepower fan.
Top

Haha - Geezers eh? Well I'm half way there, so I suppose I oughta get to it.

No cactus out here... it's too wet. We have mud, lots of it. Our rocks are usually rounded too... the glaciers smoothed 'em out for us, but they still hurt when you hit them, just the same as it does if someone tosses a bowling ball on your lap.

I never felt the need for body armor, but I guess I was never going all that fast - like I say, 30mph on a hardtail and you are barely hanging on. Crashing at that speed still sucks, but it's worse at 40... or 50... or 60... usually on rolling ST that I used to ride 15-20mph was really cranking... you might hit 30 on the hills, and be down to walking pace going up.

I never had much issue going over the bars, with all the water and mud here it was always losing the front end... that front tire just likes to walk out from under you on a slippery root or rock.
Top

To me, mountain biking is (was) about the challenge of taking a bicycle out into the woods and riding it on trails and terrain that bicycles had no business being on. Learning to master your balance and gaining confidence was the reward. Now, the trails are all castrated: Steep downhills are no more. Steep climbs are no more. Roots, rocks, bumps, dips, ditches? All smoothed over and filled in with crushed stone like an over-groomed ski run.

That's what we do here, the five of us doing mountain bike in this small ski town of 3500 residents. We take our bikes on our shoulders, hike up to the top of the mountain and go down in the woods anywhere we can. Unfortunately, I can't afford buying a brand new derailleur every month...

I was thinking of building a real mountain BMX... Not like a dirtbike, but a real tiny BMX with mud tires and disc brakes... But I haven't found a cheap way to add front suspension yet...
/...\ Peace, Love, Telemark and Tofu /...\
"And if you like to risk your neck, we'll boom down Sutton in old Quebec..."
Top

What you want already exists Johnny... it's called a dirt jump or even a slightly modded trials bike: 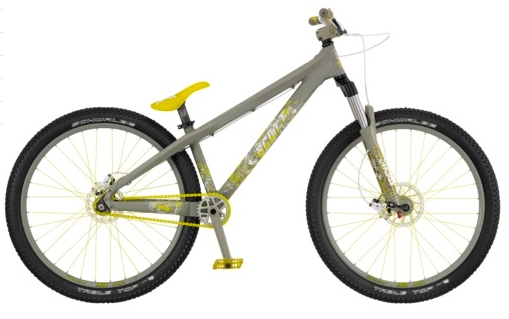 Personally I'd like that style with a rear cassette. I was looking last night and there are now 11 spd cassettes! No front derailleur, fuck those things - they are more trouble than they are worth. And you ought to be able to climb and not have to carry your bike!

Anyway - above has real wheels and tires - I believe you can get the 24 or 26" - 20" is too small for any kind of rough terrain at speed, fine for a dirt track, but one of the reasons I never liked BMX bikes.
Top

Yeah I know about dirtjumps... (I said dirt bikes, I meant DJs...) That's what all the kids do in dirt parks... But what I'd like is a real BMX with suspension and huge oversize (overcool!) disc brakes... Smaller than DJs, with 20" pink wheels...

I know it's weird (surprised? : ) but the BMX format and size is just too cool... It's just for riding in town, and go biking in the lower mountain from time to time... Just like the pair of double camber XC skis I will mount with NTN bindings... : )

I must be getting used to your oddities, because after I posted that, I re-read and thought dirtbike = dirtjump.

And yeah I'm not surprised you want something odd that doesn't exist... hahahahaha

Why not compromise and go for a 24" trials bike and change the bars to feel more like a BMX? Not positive but those headsets would probably accept a standard front shock more readily than a BMX. You could always re-spoke the hubs for a 20" rim too, provided the number of spokes is close. Not sure you could get great mud tires that wouldn't cost a fortune. Old school BMX tires kinda suck in real off track conditions.

I would drop the 20" wheel idea... it's worthless. Not high enough off the ground for a proper crank. Not enough ground clearance for off road.

Off topic but you know what I found out with my slick-tire hybrid? Those tires actually grip AWESOME on roots and rocks. They are like rock climbing shoes. They suck on loose dirt and mud, and the rims are so laterally soft you can't really go very fast without fear of turning them to a banana... but they do work. I rode a trail last summer with mine just to see how it was... it would be equivalent to skiing a 40mm wide track ski on 2' of powder

Not ideal, but it's doable.
Top

If you had the choice between the two, how they ride aside, which would you go for:

I prefer the drivetrain on the Spec but the front shock on the Cannon.

And then there is this in the back of my mind, which I used to have:

in which case I sell my current bike (it's a Spec Sirrus) and just use that for everything. I could probably ride 95% of what's available to me close to home with the Crosstrail, and ride it on street and light trail... it's the other 5% and being able to ride aggressively that has me thinking I should just keep my Sirrus and buy a real hardtail MTB.

Another option as a do-it-all hybrid:

MikeK, you may like some of the bikes that Surly sells. Check out the 'touring bikes', especially the ECR (camping/explore bike) and the Krampus (more trail oriented.)

I ride a Karate Monkey that I built into several different iterations, including a cyclocross bike, trail bike, adventure bike, etc. I've had that frame for over 10 years now.

They all come with many attachment points for various racks and fenders. You can run it single-speed or gears. They take skinny tires and up to 3" fatties. Very stout steel frames, great customer service. Shit, Surly even brews beer!

Cool - I'll def look at those, thanks.

A light trail/cyclocross type bike would be ideal for me, although I'm kind of pining for a real mountain bike again.

Maybe I should just do a frame off build and get two sets of wheel/tires... one 700c set for light trail/road, one set of fat 29ers for dirt. A good lockable front shock would be ideal for that.

I'm basically looking for a bike I will ride more... I rode my past MTBs and Crosstrail way more than I ride my Cirrus - it just doesn't excite me. Even with a MTB I still rode on the road quite a bit, but mostly it was in between trails or riding to a trail... I did the same with the Crosstrail on our more urban gravel and smooth dirt trails.
Top

MikeK wrote:Maybe I should just do a frame off build and get two sets of wheel/tires... one 700c set for light trail/road, one set of fat 29ers for dirt. A good lockable front shock would be ideal for that.

I ended up building my wheels with good hubs (DT Swiss 340 centerlock)) and some cyclocross rims and then just change tires from cyclocross knobbies to big fat MTB tires when I wanted to. Saves money and then you don't need to mess with cassette, discs, etc when you swap. Those wheels lasted several years and a few thousand miles of hard trail riding before the rim tore apart.

Surly bikes are for versatility and fun. They are not really racing bikes, so I like that they put resources and R+D into innovative and useful designs. You said you do a fair amount of camping and the ECR is especially suited for bike camping. They seem to really overbuild their stuff yet it's not unreasonably heavy. My next door neighbor has a Big Dummy which she hauls paddle-boards, etc down to the beach with. It's a pretty weird looking rig but it's designed well and works as intended. I've never liked the fact that most decent bikes are race-oriented, and Surly is one of a handful of companies that buck that trend.
Top
Post Reply
41 posts