Maine Huts Trail Thru (without the huts)

Get psyched before your own next trip... fire your imagination and expand your horizons while discovering new telemark and backcountry skiing destinations from around the world. Our Trip Report Archive is packed with inspiring and informative words, photos and video, it’s a wonderful resource made possible by the contributions of thousands of enthusiastic members of our community. Come on in and get your stoke on…
Post Reply
7 posts • Page 1 of 1

Maine Huts Trail Thru (without the huts)

One of the two hut systems in Maine is aptly named Maine Huts and Trails. It consists of 4 eco huts separated from each other every 10-15 miles. I haven't done any research but from memory ... the first hut was Poplar Falls hut, then they built Flagstaff Lake Hut, followed by Grand Falls hut and finally topped it off by building Stratton Brook Hut. The huts are connected by non motorized trails that get groomed regularly....with one exception - the trail to the Grand Falls hut from route 201 at West Forks gets infrequent grooming. It is the most advanced and remote trail with constant steep ups and downs over 15 miles and an elevation gain of 2200 feet. It was therefore a great news to me to see that the grooming updates were posted on the TrailHub app instantly. Presidents Day weekend was coming up and the plan was to groom this trail right before Friday.

I contacted 2 Canadian friends I met last year during my Baxter State Park thru ski trip and they were game to do a Maine Huts thru trip with me. Everything seemed to be in place.

or basically a pair of skis that doesn't get as much ski time as it deserves. I figured the trails will be groomed and if there are portions of trail with groomed tracks then my skis will fit in for added efficiency.

The forecast was for 30 degree Saturday, 20 degree Sunday and 15 degree Monday. I prewaxed my skis with purple glide wax, packed purple, blue and green kickwax, F4 magic potion (after all these years I really don't know if this shit works), a small scraper and a thermometer that I never use.

The total trail end to end is about 50 miles. We planned 2 nights, 3 days of skiing would be enough. In my twisted dreams I saw a possibility of doing it in 2 days but my dreams are dangerously skewed

Friday afternoon I drove to Carabassett in a snowstorm to one of the most beautiful hostels I have ever seen. 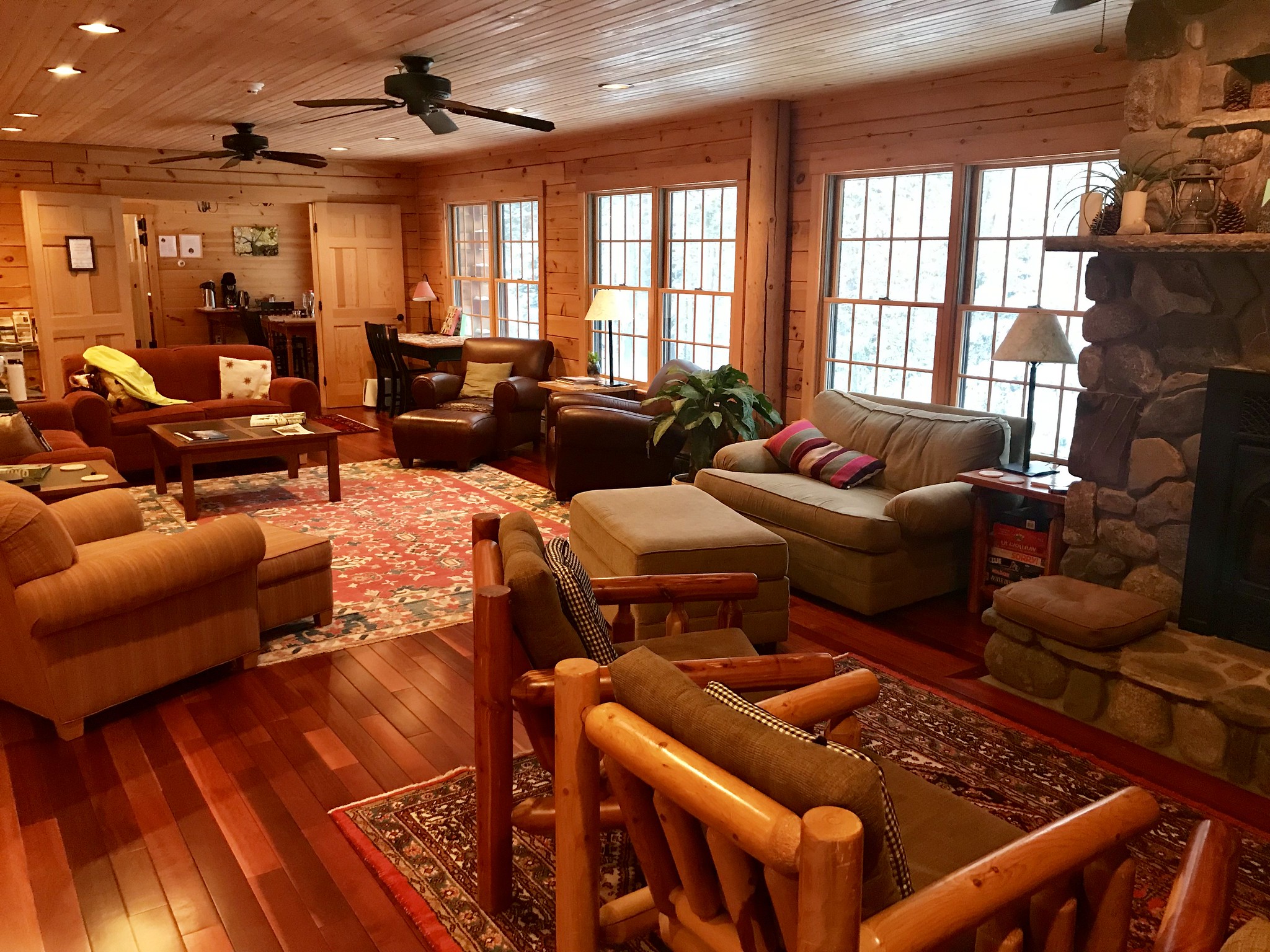 Hostel of Maine was only 1 mile from the trailhead where I was to meet my friends on Saturday Morning. We left my car at the trailhead, loaded my backpack and skis into their car and drove 90 minutes to West Forks, Maine trailhead from where we started skiing. 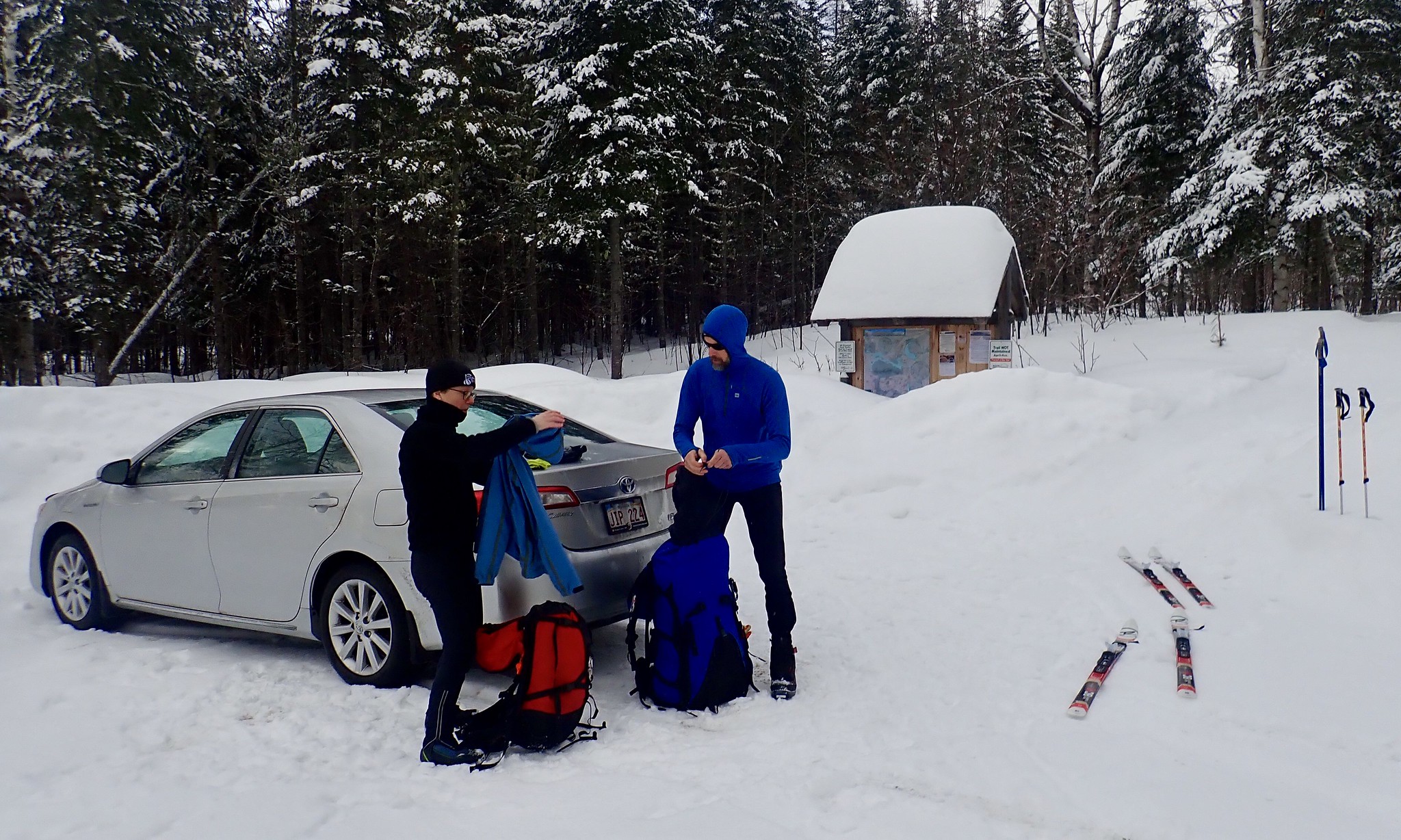 Because I rode the trail to Grand Falls hut on a fat bike about a month earlier I knew about the constant steeps and thus elected to slap on my nylon kicker skins right away. We stepped onto the trail and...well...let's just say it did not get groomed after the snowstorm, and after the rainstorm. Breakable crust. aargh. The snow was several feet deep on the edges of the trail, packed on the trail with a few inches of crust on top of it.

Oh well. Let's just say that the scenery was gorgeous but the downhills on kicker skins and a fully loaded backpack were challenging. 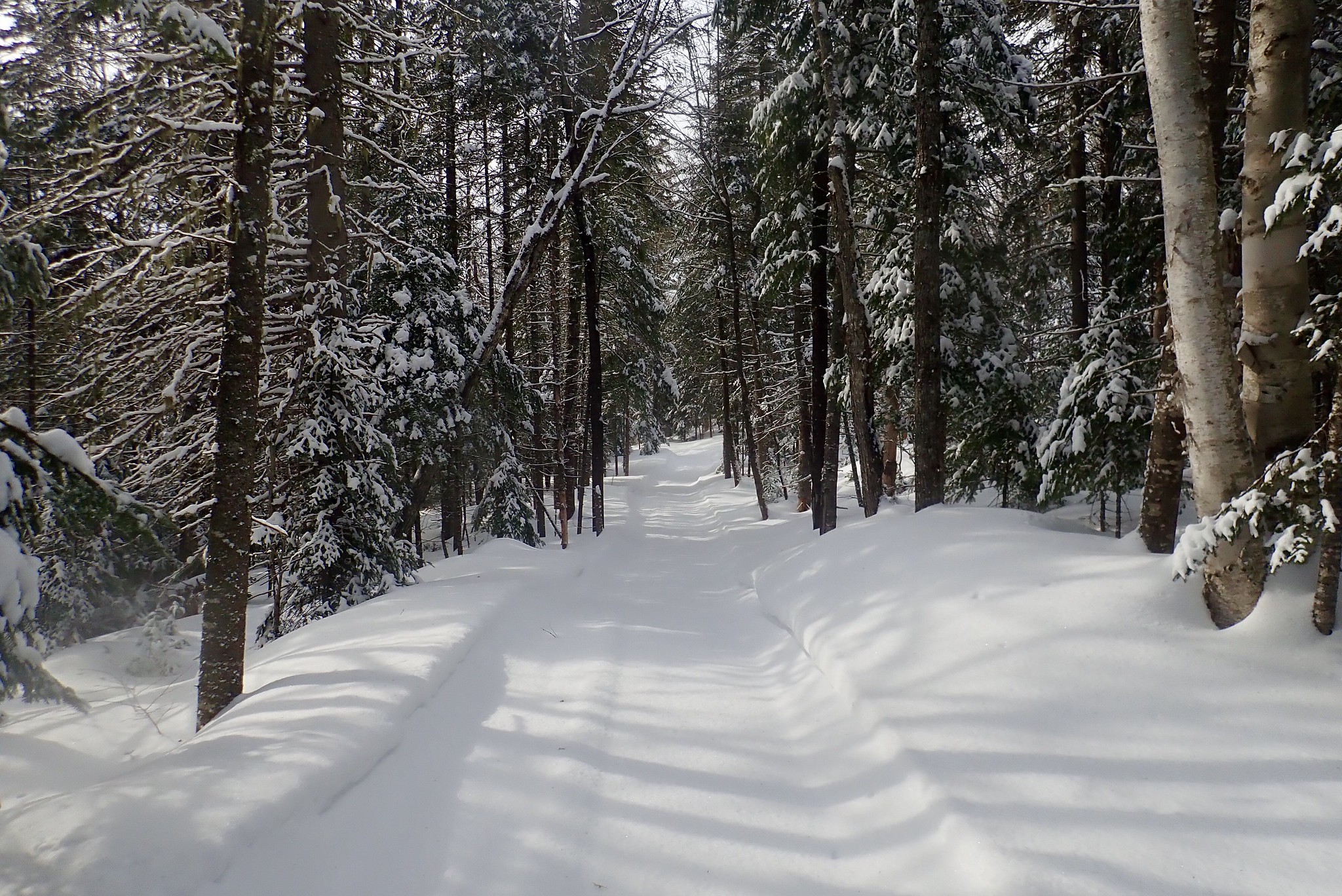 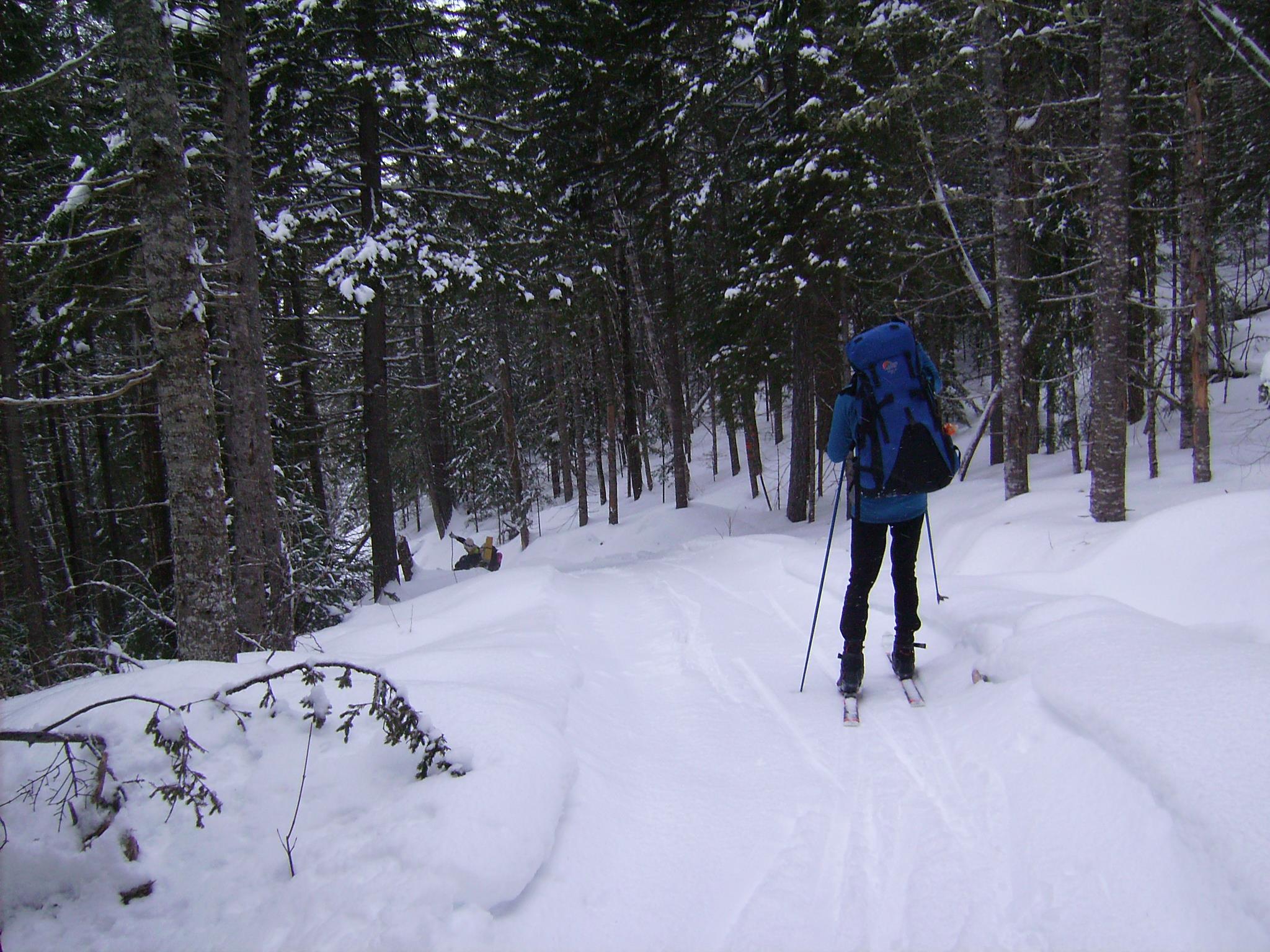 I ate snow a few times, once with a full yard sale, spilling my crackers, thermoss and losing my hat in the snowbank

- the steeps with crust, the jerking motion of the kicker skins, the backpack on my back and the skis longer than the width of the trail - a recipe for success 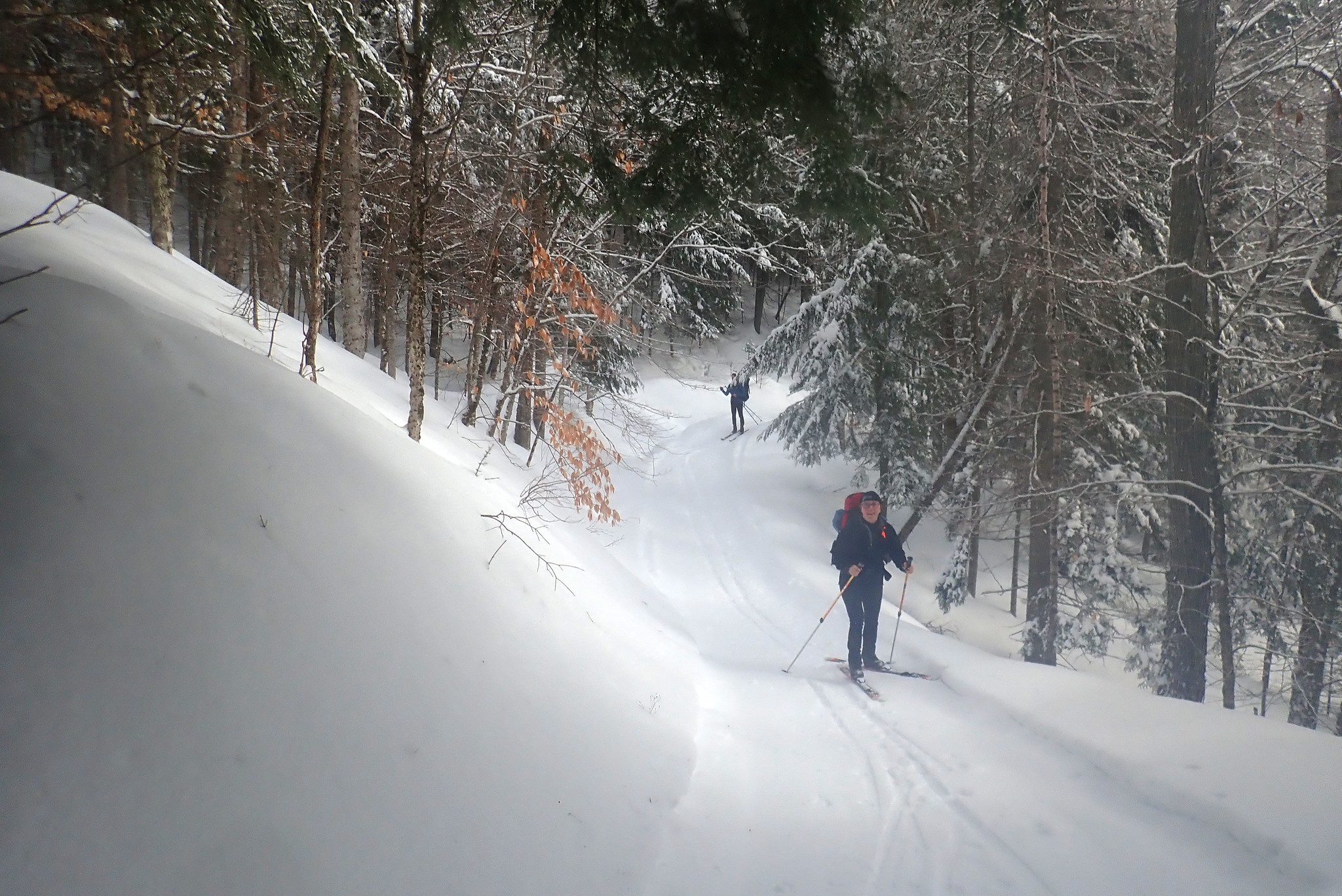 At one point we came to a hardly eaten deer kill. We may have spooked them out of the meal. I'm sure they'll be coming back. 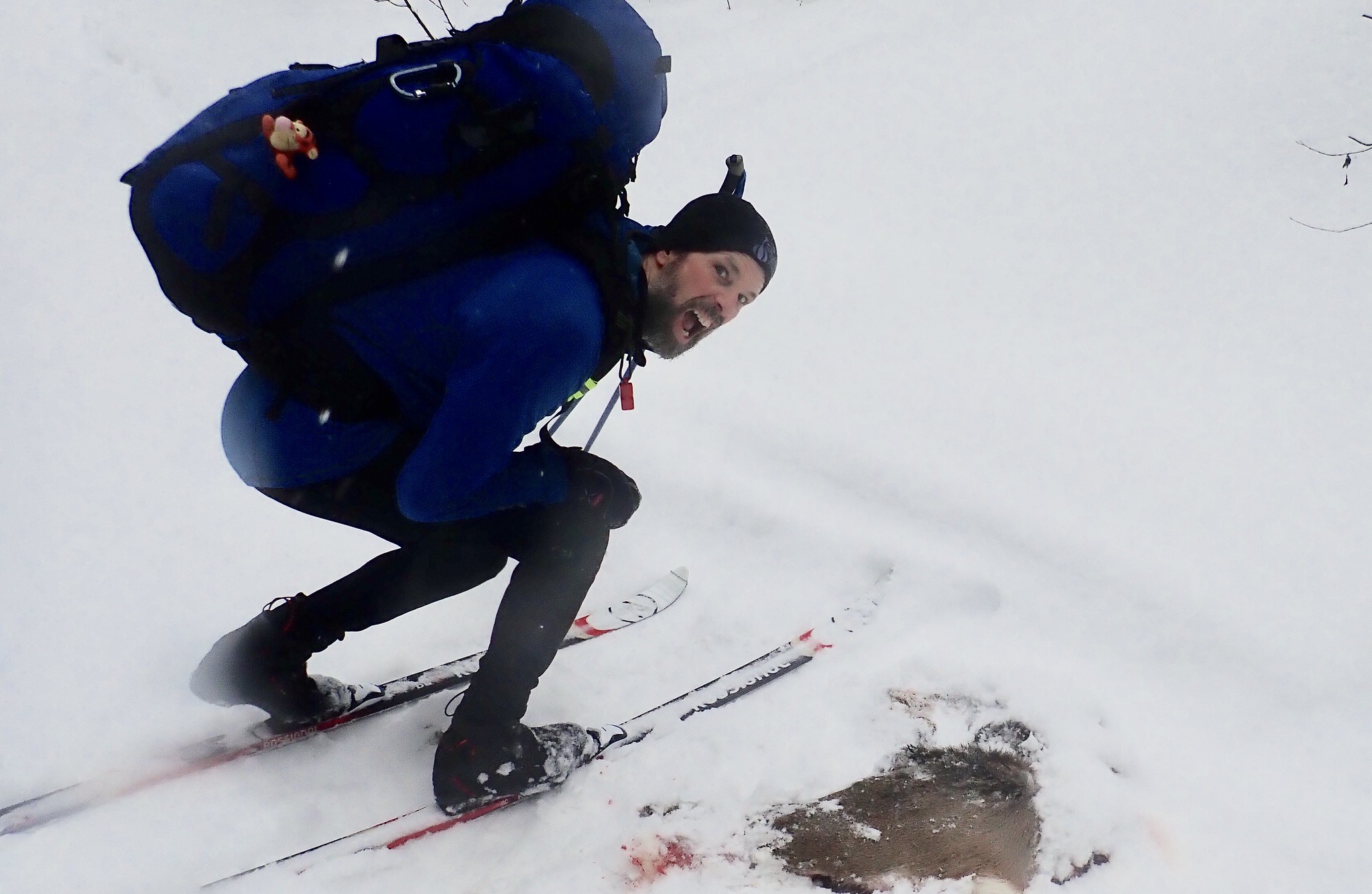 After about 13 miles the trail seemed to get reasonable so I took off my kicker skins and applied a few coats of purple. This followed 3 big hills

but I stubbornly kept the skins off. After the three hills the trail was a nice kick and glide all the way to the hut. There we at some food, refilled our water and headed out about a mile past the hut to a flat spot where we flattened snow, made food and pitched our tents for the night. 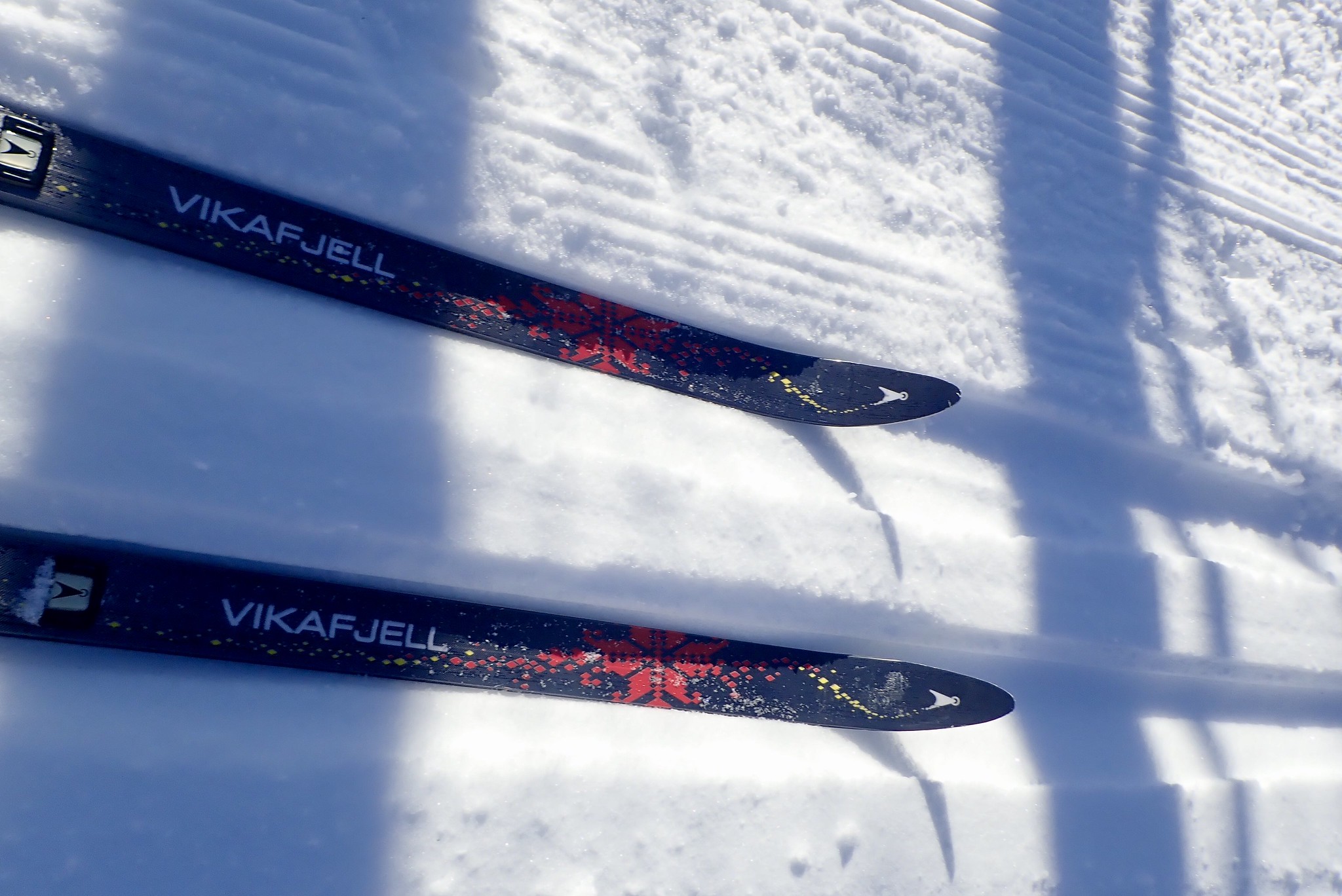 The next day was much more civilized trail day for my skis. I waxed with blue and set out. After a few reasonable hills we meandered for miles along the river on a beautiful trail until we reached the Dead River road. 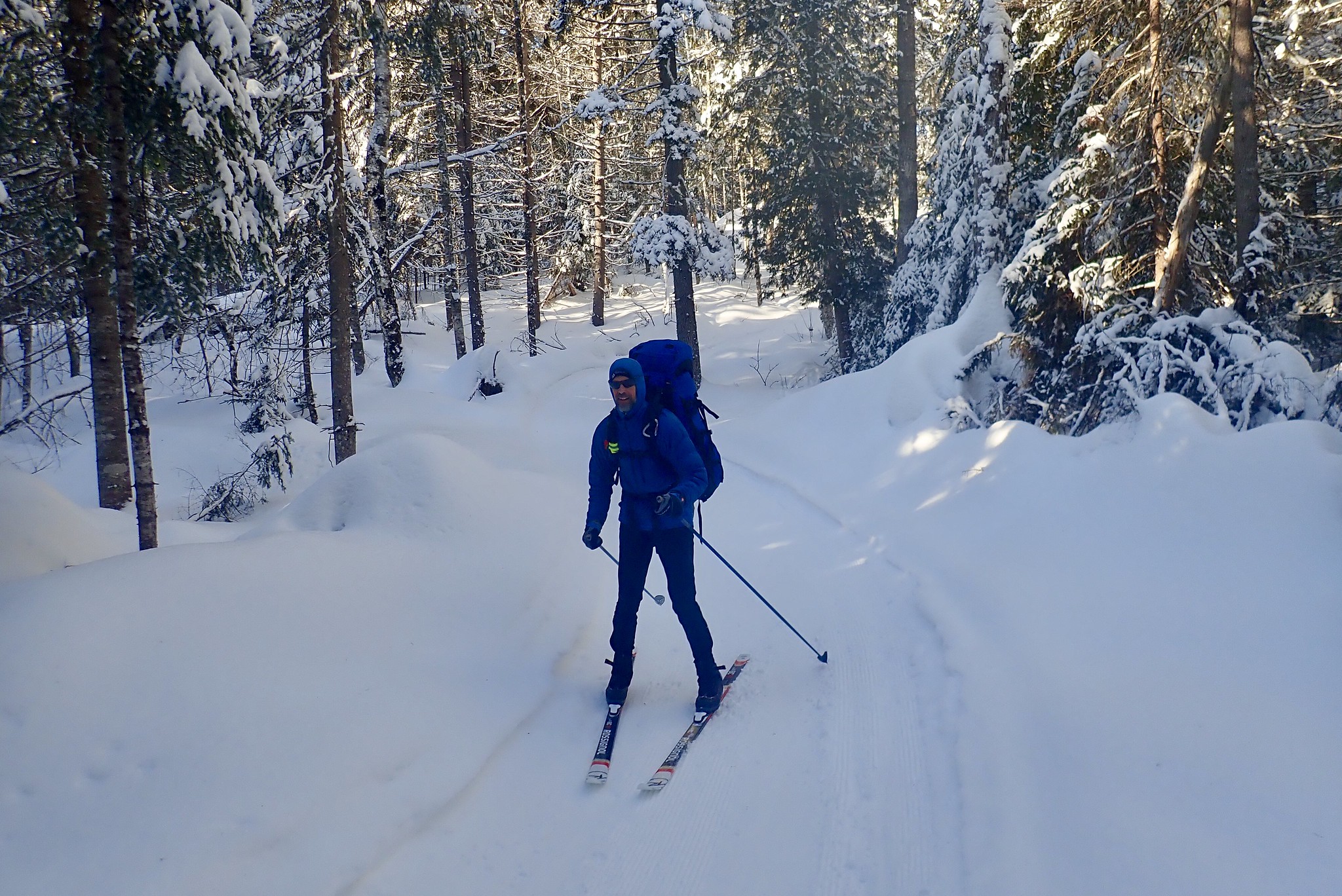 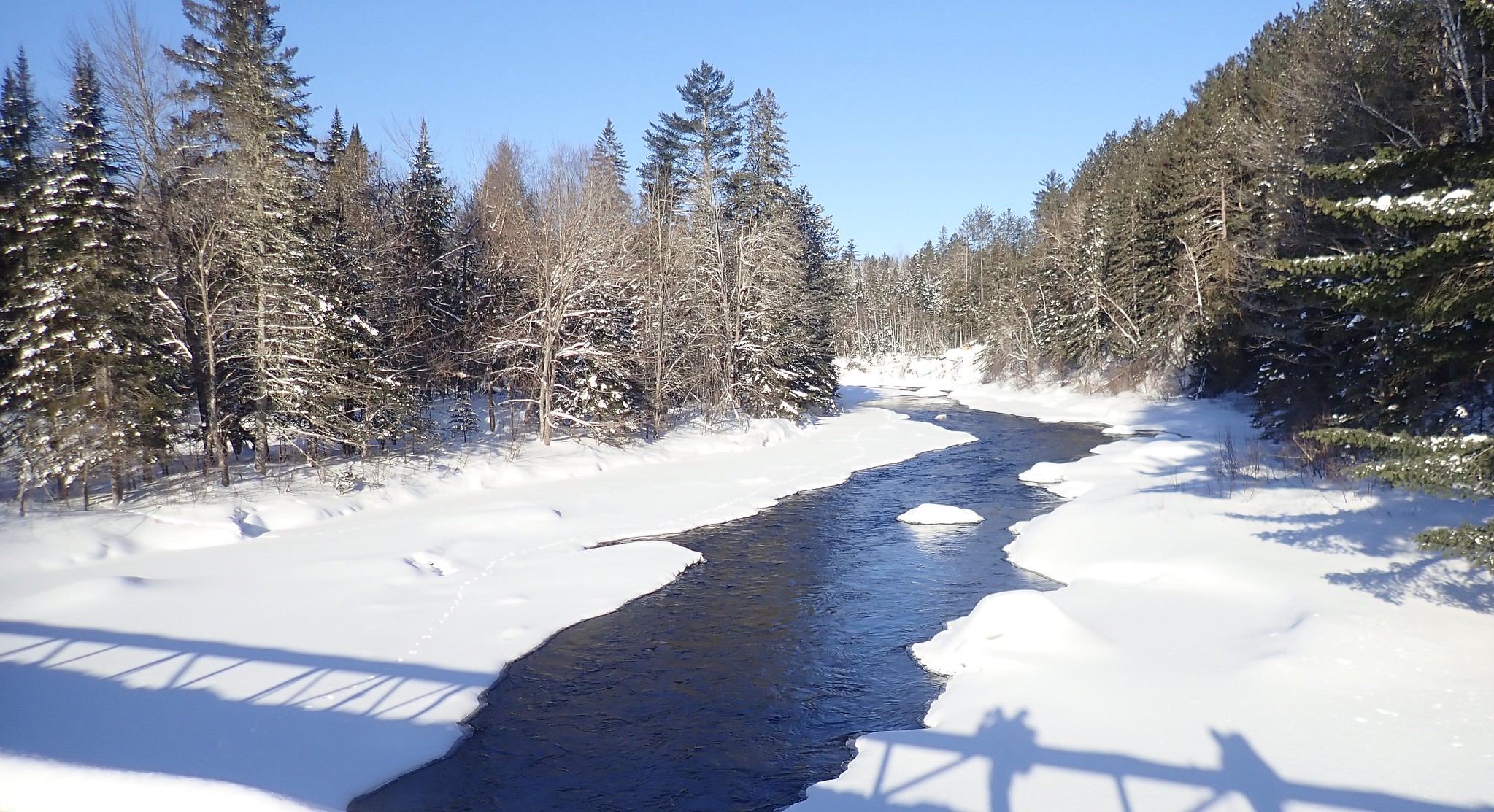 We found another deer kill. This time the coyotes were pretty thorough: 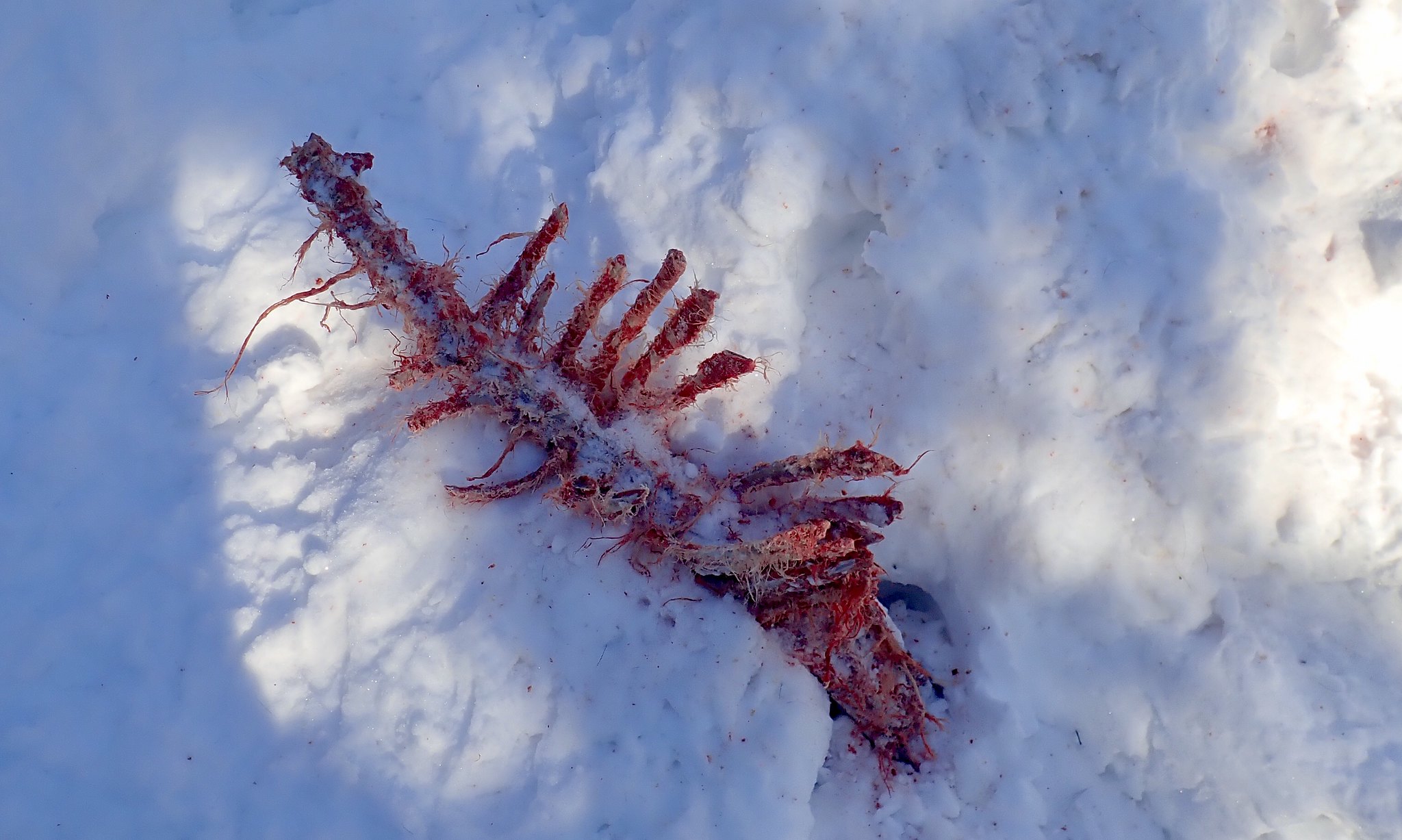 I put my kicker skins back on for the hills that followed and soon after we reached the Flagstaff Lake Hut where we ate some warm food and refilled our water bottles. We've skied 13 miles so far but needed another 5 miles to make it to a mountain overlook where we planned to camp. 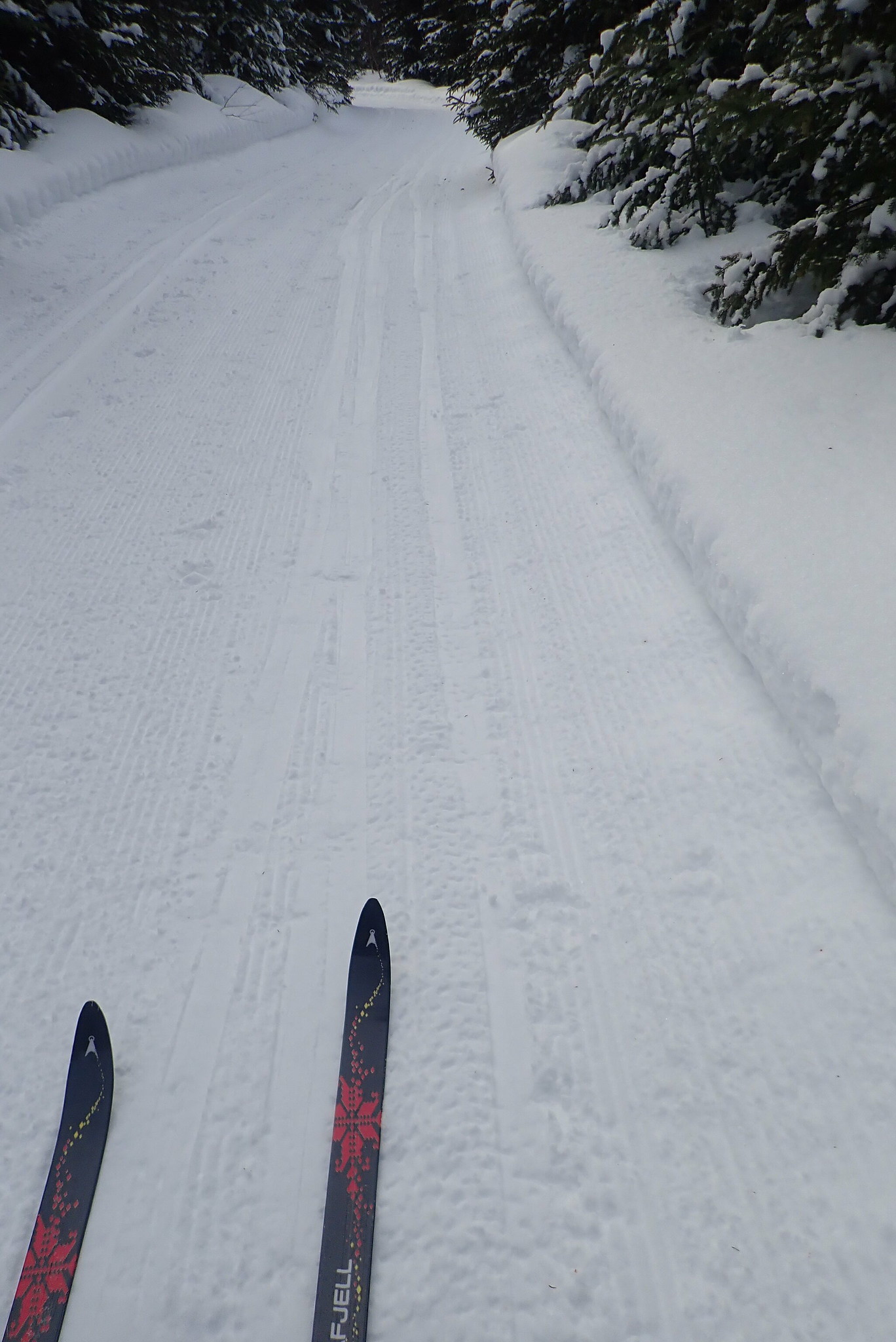 The trail was a proper series of mild up and down waves for a pleasurable several miles until we crossed the road and started climbing again. On go the kicker skins. 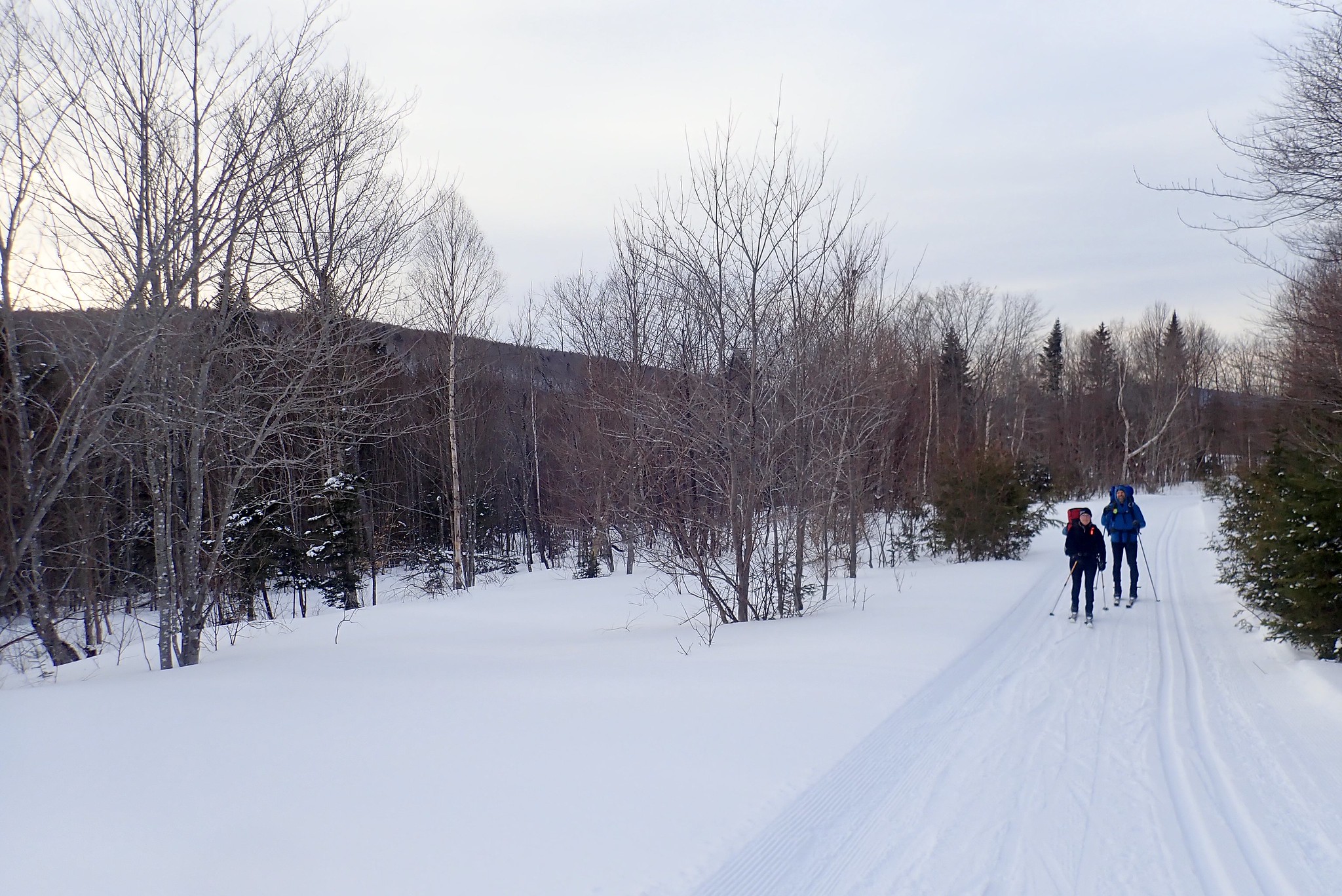 We wrapped the day at about 18 miles of skiing, set up our camping place, ate some food, drank some of my homemade Limoncello went to bed early.

The next day we started bright and early. I waxed with one layer of green. The objective was first to reach Poplar Falls hut where we planned to eat our brunch. The skiing started with a thrilling downhill section and after we crossed the road the few hills were forgotten among the well groomed and pleasant touring trails. 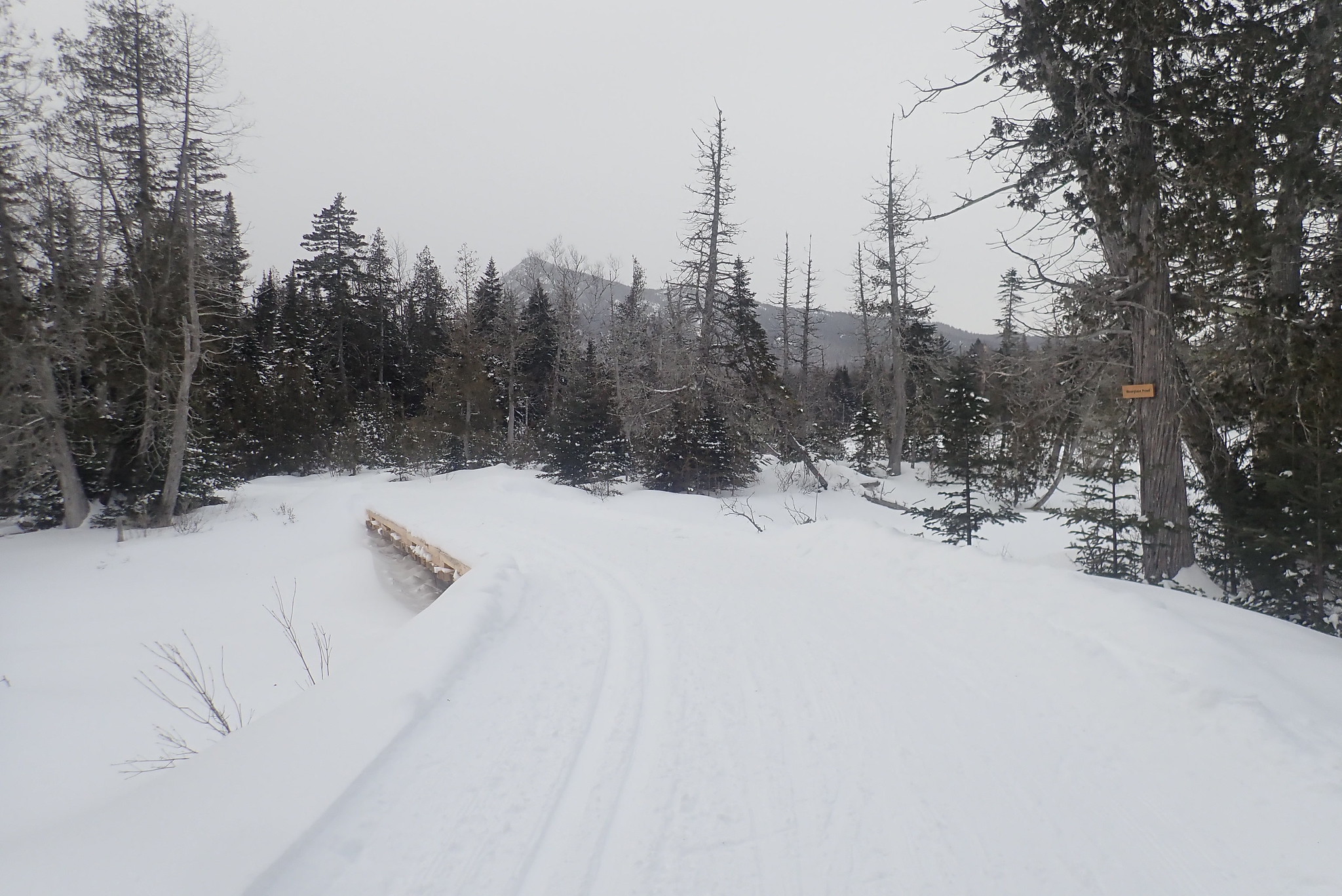 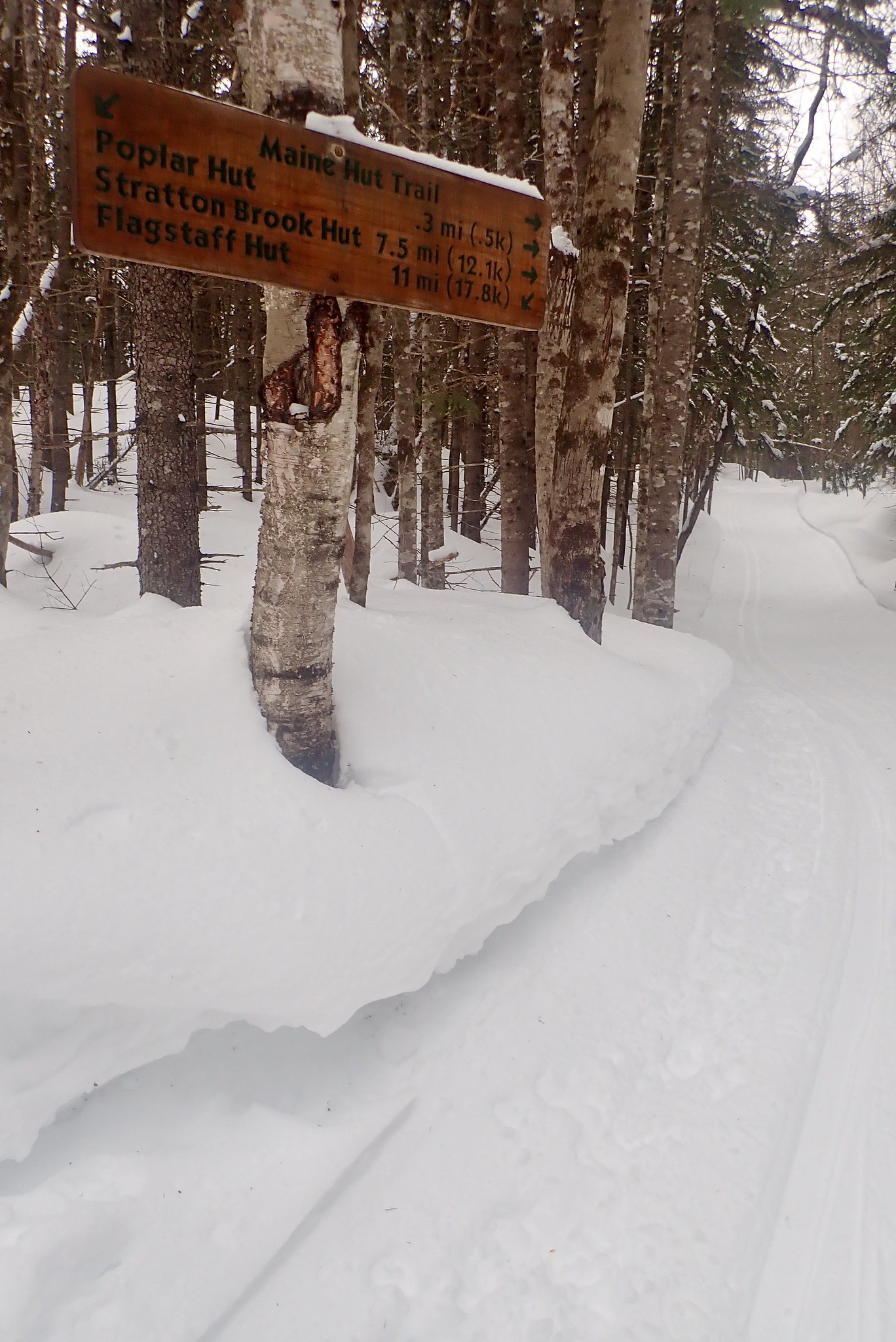 I did not bother with kicker skins for the final .3 miles to the Poplar Falls hut. Herringboned up, entered the hut, filled my freeze dried food pouch with boiling water and took a quick hot shower while the food was rehydrating. I also changed into fresh layers.

The ski from the hut was another thrilling downhill followed by a pleasant up river trail along the banks of the Carabassett River. I waxed blue all the way. 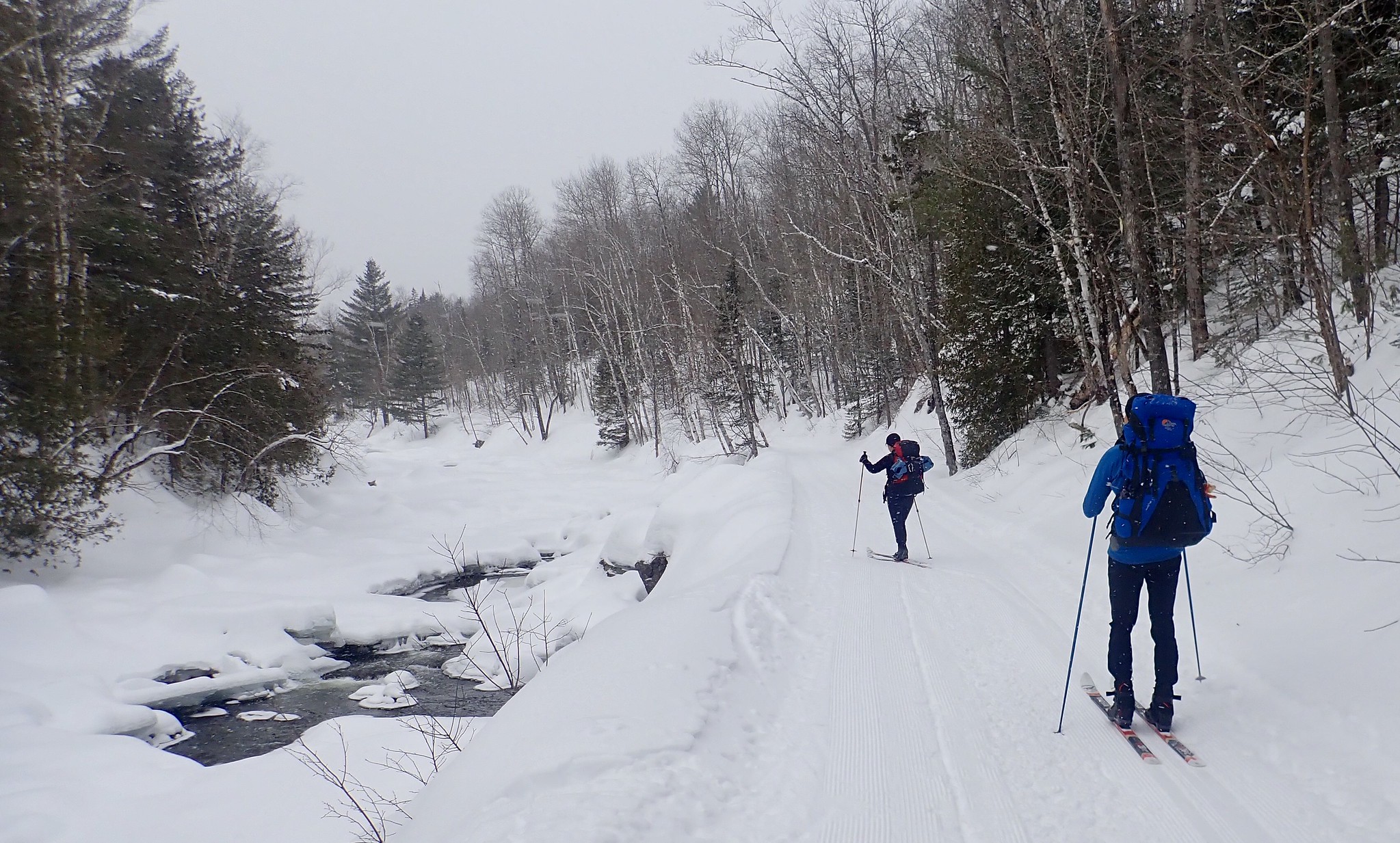 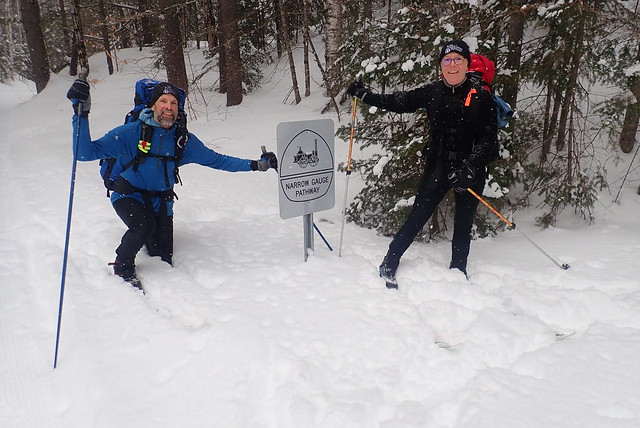 After 15 miles we arrived at the trailhead where we initially left my car. The Maine Huts thru was done. Great Trip with a great company! 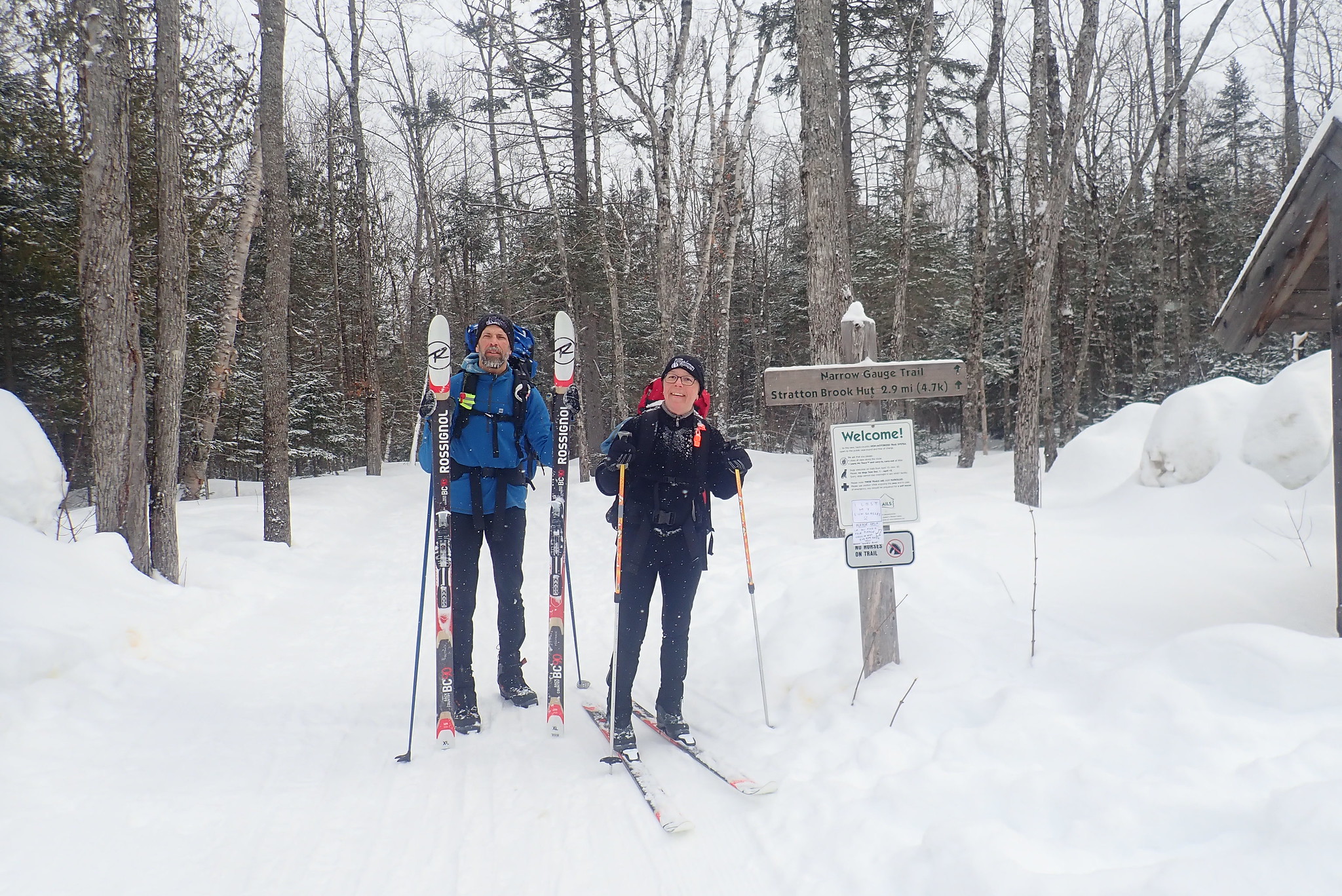 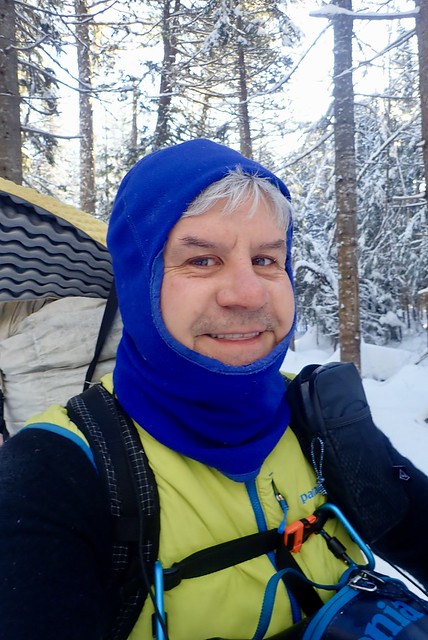 First thanks for posting, looks like a great trip in beautiful country. I don't winter camp, however I do pay attention to what others post about some of the requirements. I found your approach interesting utilizing huts, yet still tent camping. I know I would be interested in any of your camping details you might care to share.
Another thing I couldn't help but notice is that your partners were on Rossi BC 90's and you were on an Asnes mountain touring ski. I own two similar skis, an S-112 and a Gamme 54. They are very different skis, how did that work out on a 3 day tour? I'm closer to 60 than 50, is it just that you have some friends to share an adventure with really all that matters? As long as you can all help carry camping gear and food, and ski an average of 16.5 miles a day, who really cares about pace?
If I haven't said welcome, ... Welcome, I really enjoyed the photos and the story.
Top

It does help that your friends are triathlon athletes

When winter camping one has to pay attention to private property along the trail but there are spots to camp if you do Your homework.

The huts welcome any revenue they can get - You can buy food at the huts, tip the croo and also sign up as a volunteer on some weekends.

This was presidents day weekend and we expected the huts to be full but I was surprised the Grand Falls Hut (which is usually least booked) was booked full for Saturday night. The trip could also be done in 3 nights by staying at the huts instead and packing extremely light. You only really need 3 things - 1. water bottle, 2. a 20 degree sleeping bag and 3. a spare change of clothing for sleeping and to slip into while your sweaty clothes get a rinse and hang in the drying room at the hut. I have contemplated trying to do it in two nights on skate skis but the first day from West Forks to Flagstaff Hut would be a killer

, second day from Flagstaff to Poplar Falls is doable and third day ski out to Stratton Brook.
Top

what a great trip - another place I'd love to go. What makes you think it was coyotes that ate that deer?

there are probably 100% wolves up there too.

Sounds like the mohair skins are the best for cold weather.
"All wisdom is to be gained through suffering"
-Will Lange (quoting Inuit chieftan)
Top

Could have been wolves...what do I know

... but officially there are no wolves in Maine. I think the closest consensus you'll get from biologists is a CoyWolf.
Top

yup, there are coywolves but from what I"ve read some biologists believe 100% wolves are filtering down into Maine one by one as well. They made be gradually up'ing the percentage in coyotes as they gradually interbreed too. Some of the ones I've seen down here are huge, 50+ pounds for sure.
"All wisdom is to be gained through suffering"
-Will Lange (quoting Inuit chieftan)
Top