Get psyched before your own next trip... fire your imagination and expand your horizons while discovering new telemark and backcountry skiing destinations from around the world. Our Trip Report Archive is packed with inspiring and informative words, photos and video, it’s a wonderful resource made possible by the contributions of thousands of enthusiastic members of our community. Come on in and get your stoke on…
Post Reply
12 posts

Trip sounds awesome (definitely not ready for an excursion like that quite yet)
I live in Bangor and the Penobscot River trails look cool, I'll have to check that out this winter
Top

TreeFallin wrote: ↑
Wed Feb 27, 2019 12:34 pm
My previous trip report touched upon where I met my ski friends and as I fondly reminisced about that trip I figured it might be of interest here at the ski forum.

My mileages are estimates. I'm just ballparking it. The whole trip is about 40 or 45 miles.

Baxter State Park ski thru, known to many first hand and to even wider audience after a write up in Goodman's Book https://www.amazon.com/dp/B0066E8UXI/re ... TF8&btkr=1 is a serious undertaking. It is not the steepness of the slopes to be skied that should put you on alert. It is the remoteness of the place and most notably the middle section between Roaring Brook and Russell Pond. This section does not get snowmobiled by the rangers, this section does not get tracked out much at all and thus it has very deep unbroken snow for about 7 miles (think swimming in powder) where only the largest snowshoes make sense. Add to that two lake crossings and two river crossings and a prayer there isn't a warm spell in between the required minimum 2 week registration buffer and your departure.

A few weeks earlier I was with a group of 3, trying to do this traverse from North to South only to come to thawed out pond and impassable river crossing a few miles up from there. Being the stubborn adventurer I am I refused to give up and planned a solo traverse about a month later.

This time I planned it South to North. Packed a winter sleeping bag, lighweight tube tent, foam mattress and an inflatable insulated mattress, largest snowshoes in my quiver plus extensions, food for 3 nights, Madshus Epoch 195's, kicker skins, small lightweight pulk, spare layers, down pants and down vest with down sleeves, a few hats a few gloves and mittens and I was ready to go.

My reservations were 1 night at Roaring Brook, 1 night at Russell Pond, 1 night at South Branch Pond. The tent was only for safety ... just in case.

I arrived at the crack of dawn at Abol Bridge. 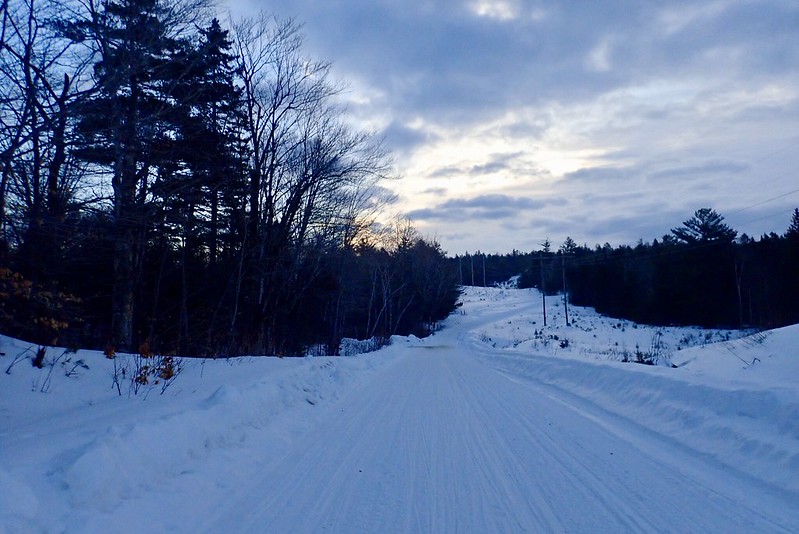 Skiing was good. I got into my zone and moved through the wonderful winter landscape. 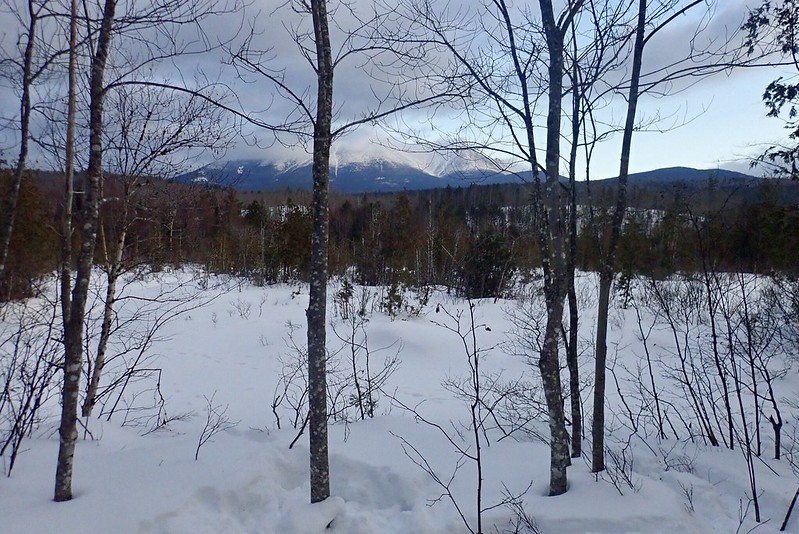 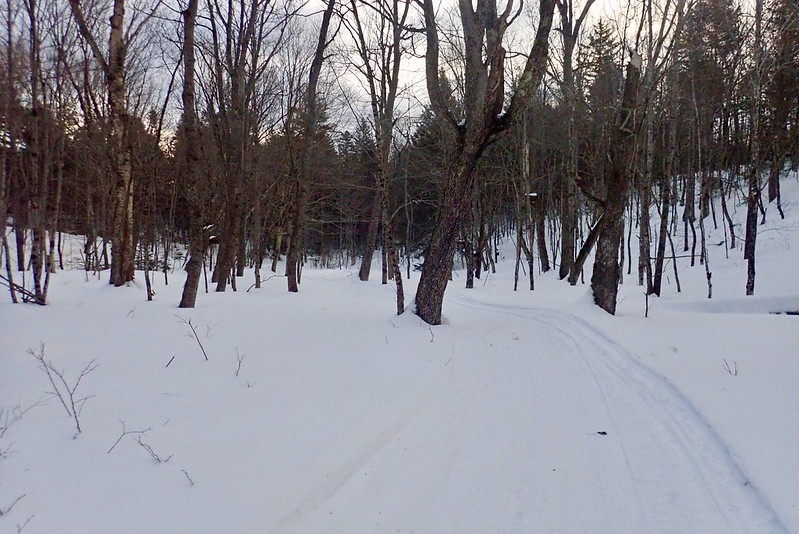 It is about 16 miles to Roaring Brook Bunkhouse from Abol Bridge. I made really good time, comparing to the other times I skied there and arrive at the bunkhouse around 11:30 am. The bunkhouse was full, I chatted briefly with others, at some food and then started getting kind of antsy. The day was still young and I knew that the most difficult section was now ahead of me. I knew I had a tent and thought it would be safest if I actually cut some of that distance now, camped, and finished to Russell pond the next day where I could if necessary dry out everything that could get wet/wrong during the traverse. And so, I packed up and decided to continue.

After I crossed the tiny bridge over Roaring brook the conditions got serious immediately. Snow was soft and deep. 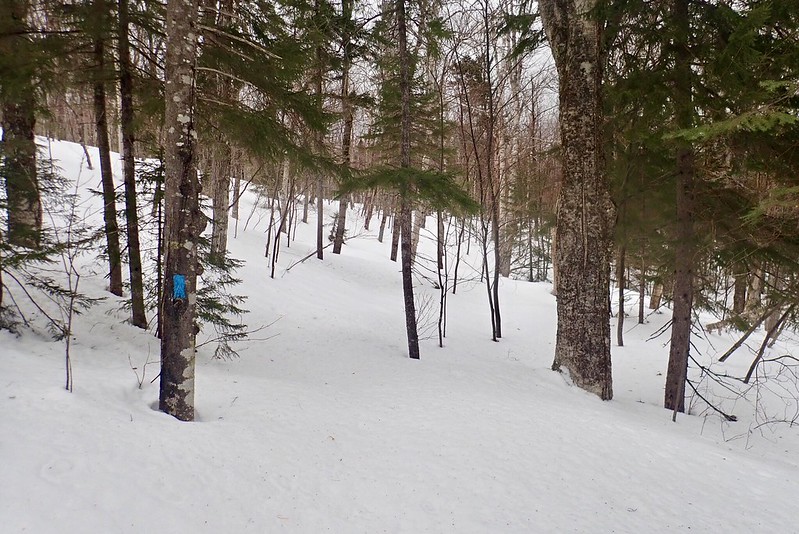 The trail forks after the bridge and I chose left. Unbeknownst to me the easier trail was to the right. There were several uphill sections, side sloped, several foot wide brook crossings where I actually had to carry my pulk over. Try that sometimes

- carry your sled while on skis or snowshoes over a foot wide deep snow bridge..., my sled rolled downhill on some of the side slopes, got stuck inn brush so I had to unbuckle and go down there to pull it out. The festivities ended when I rejoined the forked trail again. I put on my skis again with my kicker skins because in the deep snow there was zero traction on waxless base.

On I went and the going at this point wasn't too bad but the fun started again once I got close to the stream. There were countless tributaries from the hills and therefore mini ravines that were about 6 foot deep and without bridges. So in those situations I scouted uphill or downhill for snow bridges and if I was lucky I found them. When I wasn't lucky I had to usually take my skis off, put my snowshoes on, crawl down and up the tributary, pull the sled out of the ditch, continue on snowshoes until I felt optimistic enough to think there weren't going to be any more of these, put my skis back on, only to repeat the whole process again further down the trail. And so this went on for probably 5 miles and it was now getting dark. 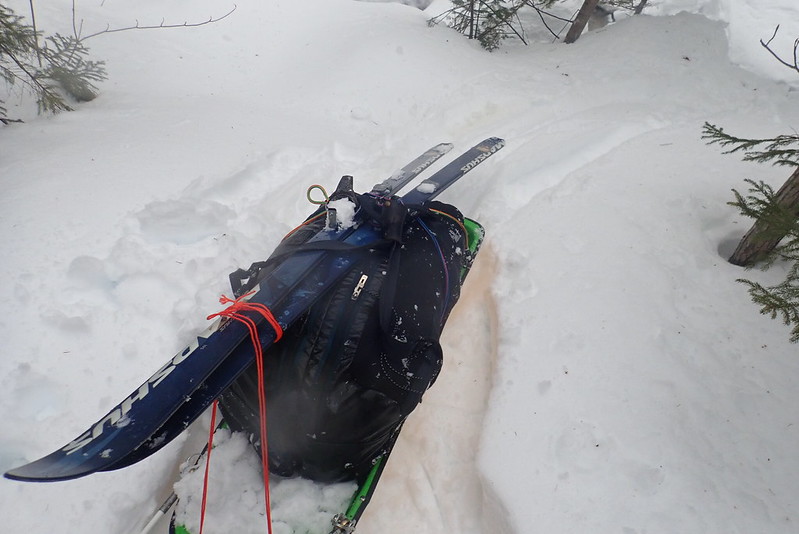 I knew I was getting very close to Wassatoquik Leanto but I also knew that it was really easy to lose the trail and decided to call it a day. I pitched my tent, cooked some food and slept like a log. 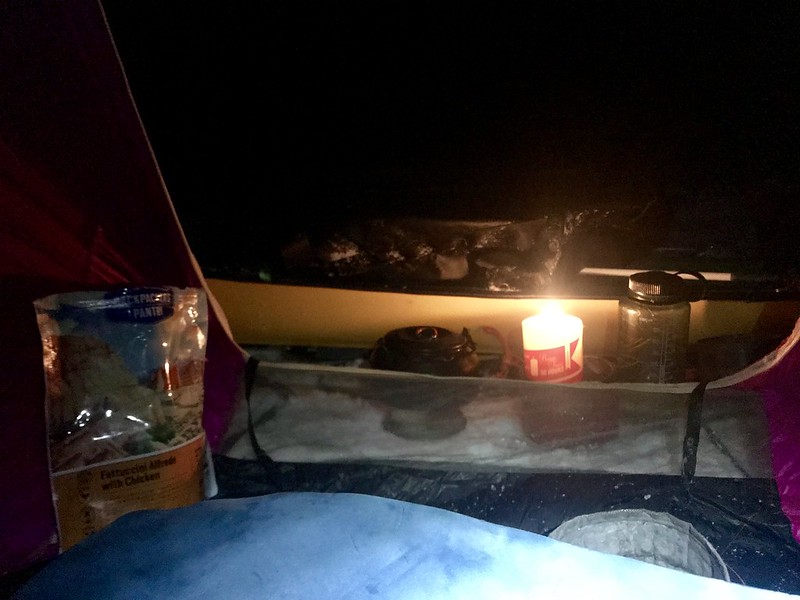 I felt good in the morning, packed my stuff and continued skiing towards Wasatoquik stream Lean-to. The going was still very hard but soon the tributary minefields stopped and it was just regular backcountry touring albeit in snow that was too deep. No big deal. My concern now was the water crossing. I was hoping that I will be able to safely cross the water. I arrived at the lean to and found a safe crossing over the first water, then I moved towards the wider crossing and to my relief I found it to be totally safe to cross. At this point a huge burden fell off my shoulders. I figured I have passed the biggest worry on this trip, the sun was shining and the day was great. I sat down on my pulk, pulled out a bar of chocolate and enjoyed the sun for a few minutes. 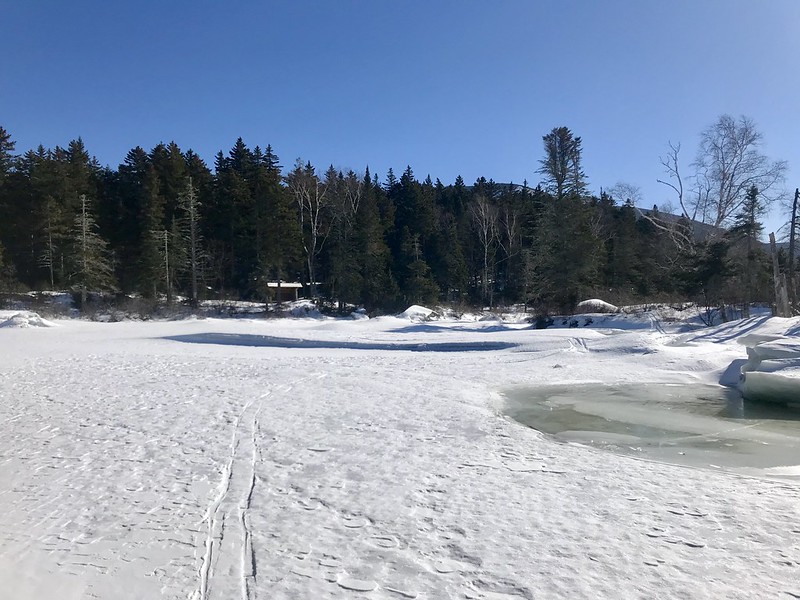 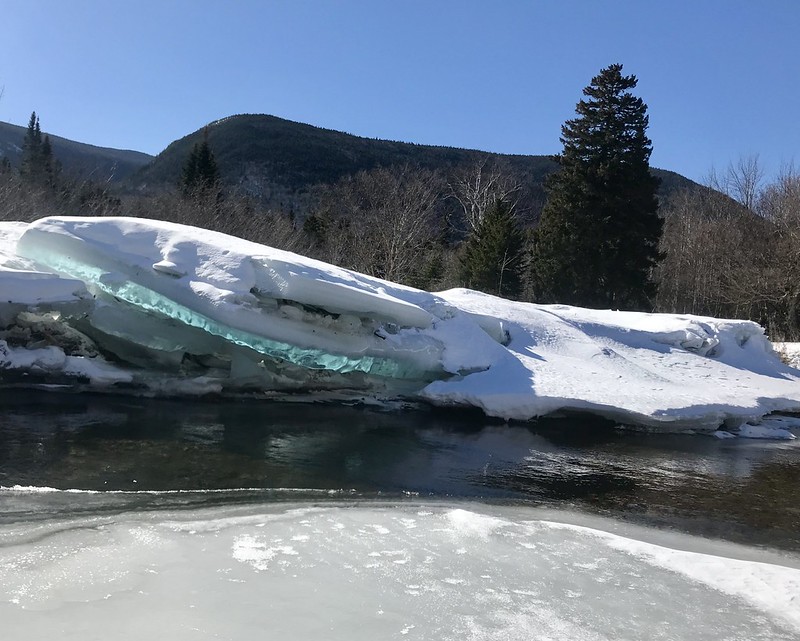 I climbed onto the river bank and continued skiing towards Russell pond. Unexpectedly I came upon one more water crossing that was actually more sketchy but was able to cross safely over a well formed snow bridge. I kept on skiing when I heard the sound of a snowmobile. Only park rangers are allowed into this section of the park. Sure enough I saw him coming towards me. I smiled and waved. He was nice but said: "we've been looking for you" ... yesterday in the evening the ranger was either going down a list of reserved names or the people in the bunkhouse told him I kept going. Either way ... the ranger got worried and looked for me at the next bunkhouse at Russell pond and I wasn't there. I apologized to the ranger and tried to explain my decision making and he appeared one part impressed I made it this far and then he bid me farewell and left.

The skiing now was easy as the trail was well broken by the snowmobile. After a mile or so I arrived at Russell Pond bunkhouse, made a fire in the woodstove and started drying my stuff. It is about 21 miles from Abol Brook to Russell Pond. 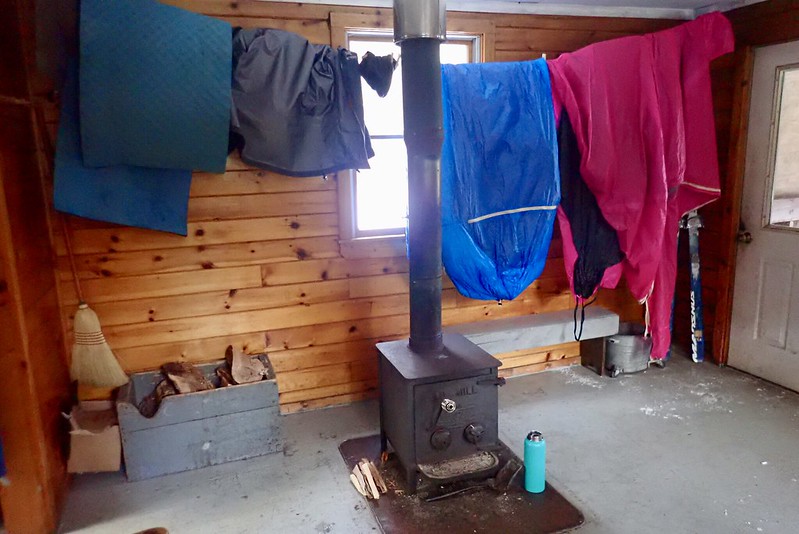 The ranger returned. Said, he needed to give me a warning ticket because there was an official record of them looking for me and because I committed an act of unauthorized camping

That was ok with me. I gave him my information and thanked him for all of it.

Later in the day another couple of skiers arrived at the bunkhouse from opposite direction, from South Branch Pond. We soon made friends. They hailed from Frederickton, New Brunswick. We cooked together, went to fetch water together. I fished for water in the open brook beyond the Pond. 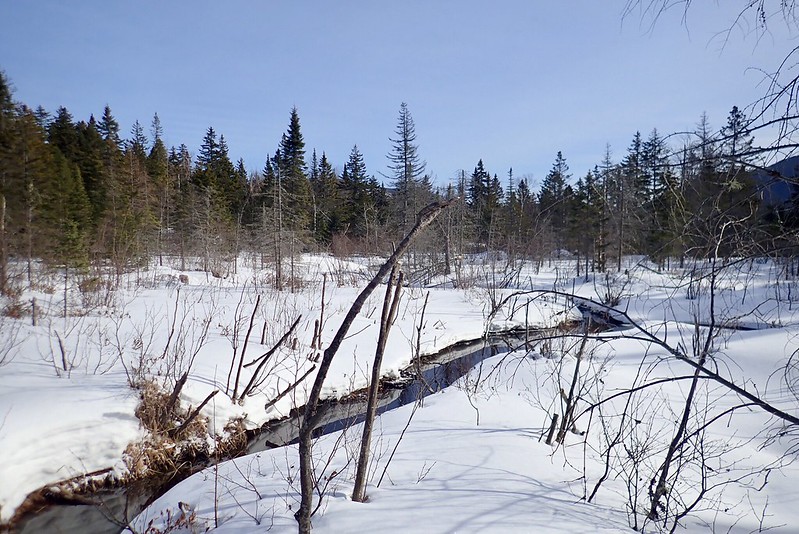 My friends borrowed the bunkhouse axe and tried to make a hole in the ice - that was funny because the ice was so thick that the axe shaft wasn't long enough to continue chopping and we never reached the break throu to the water. 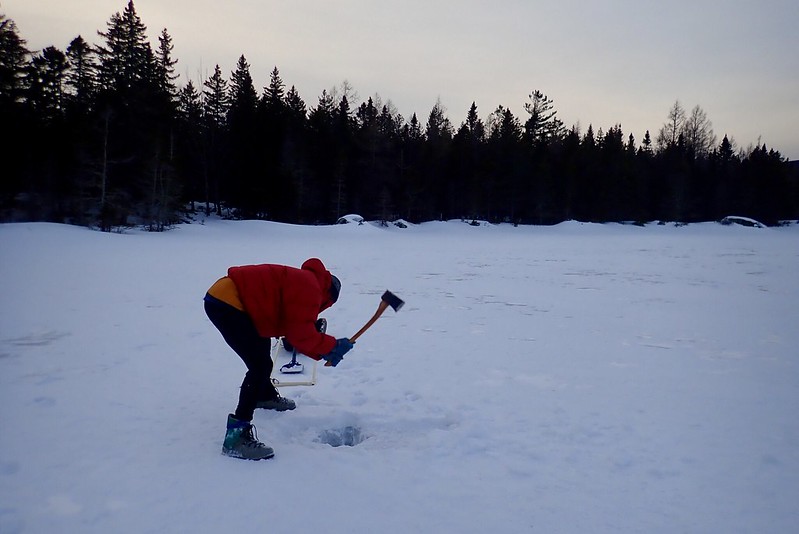 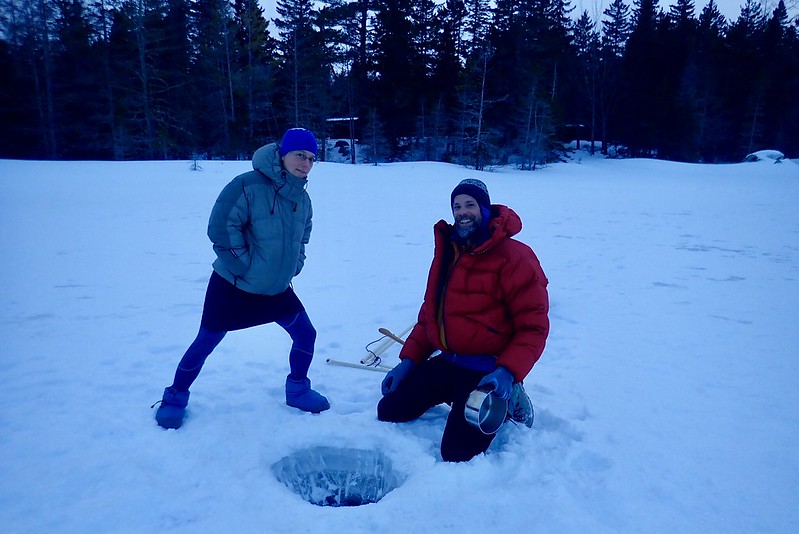 It snowed over night. We woke up to hero ski conditions with about 3 inches of freshies on top of great firmly snowmobiled base. The ski from Russell Pond to South Branch pond was magnificent. 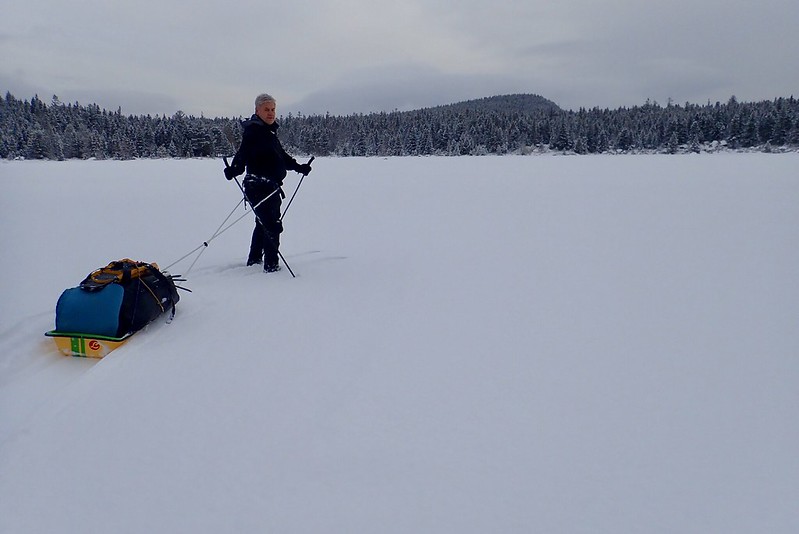 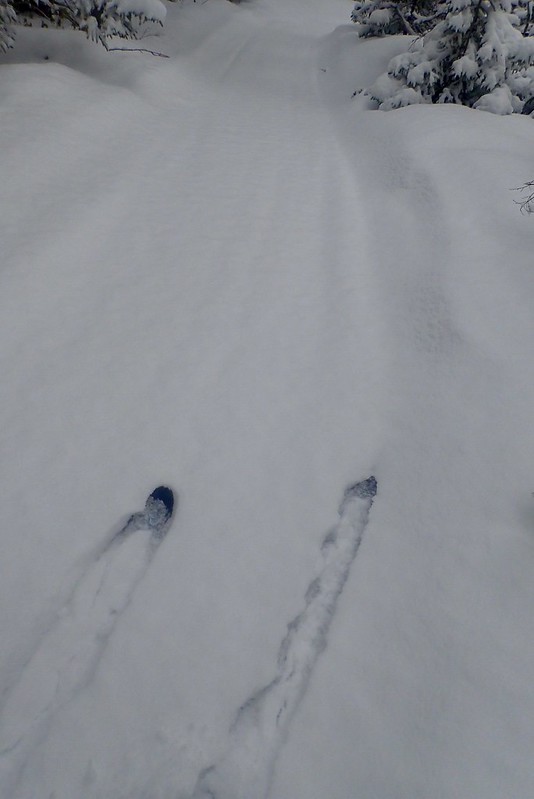 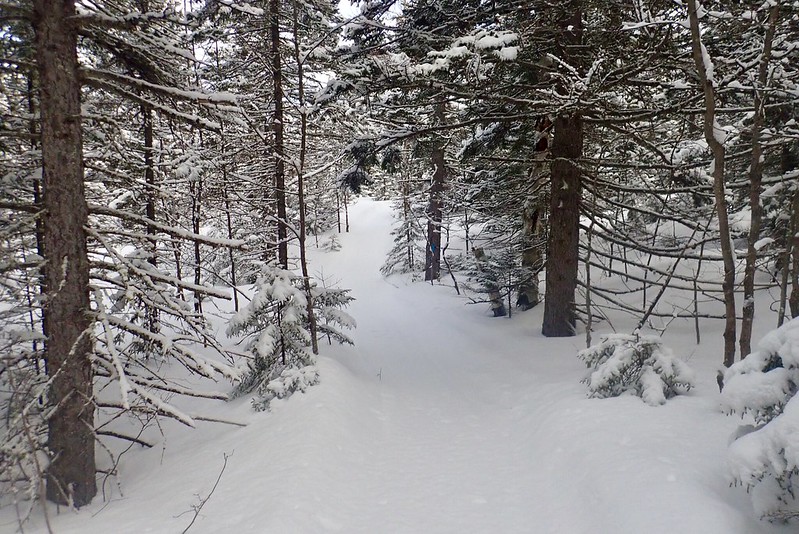 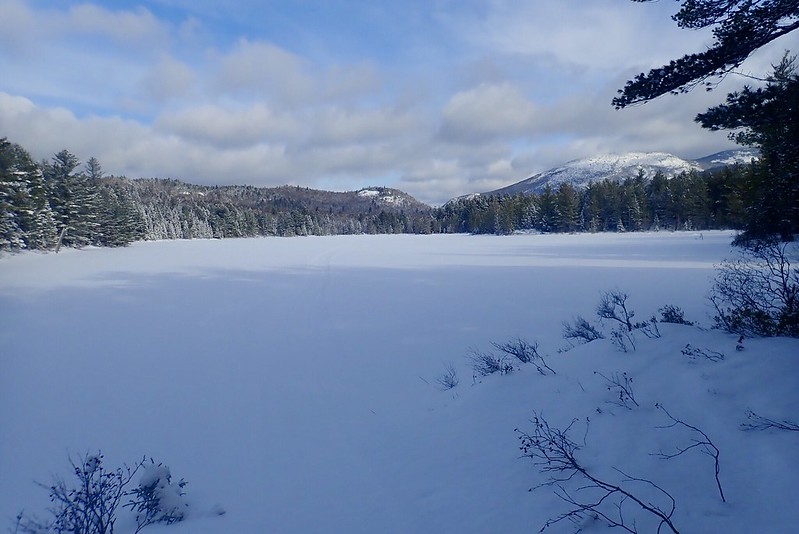 After 10 plus miles I arrived at South Branch pond bunkhouse and made camp for the night at some food and enjoyed the warmth of the wood stove. 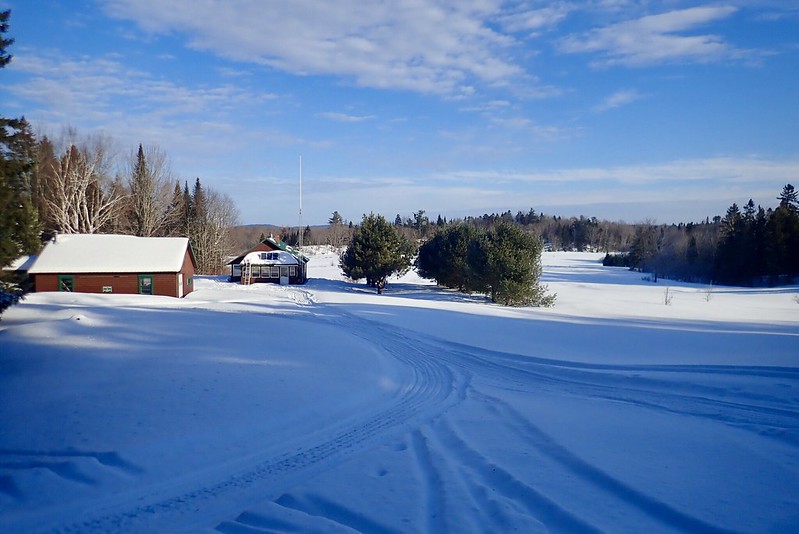 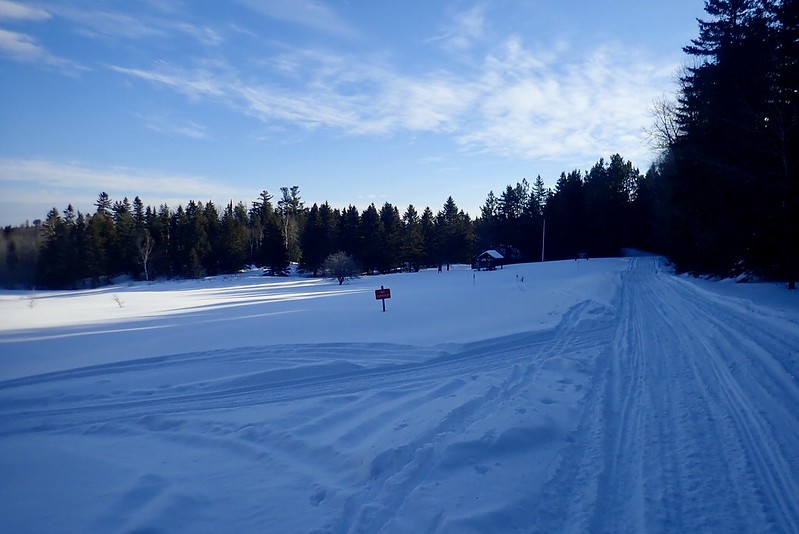 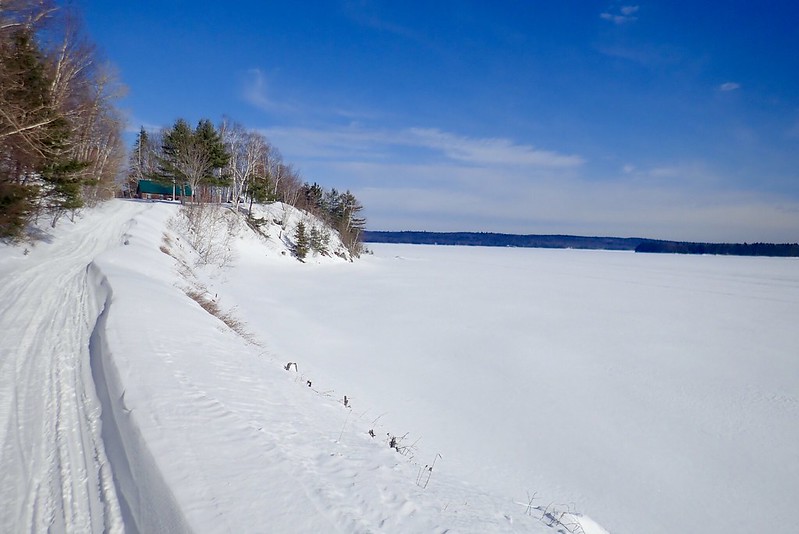 I consider this solo ski through on top of my crazy outdoor accomplishments that won't soon forget.

Hello everyone. Thank you for sharing this with us, I find it really interesting! However, I have a question to ask you if it is possible. Thank you for your return  Regards
Top